Birds belong to the family of Aves , they are also known as avian dinosaurs

Main Characteristics of birds are

A birds anatomy is very complex and perhaps the best engineering model of god. Here we will look at parts that are external and used for Bird Identification only

A bird is identified by combination of presence/ absence of various features in its external anatomy. The external parts of a bird are as follows 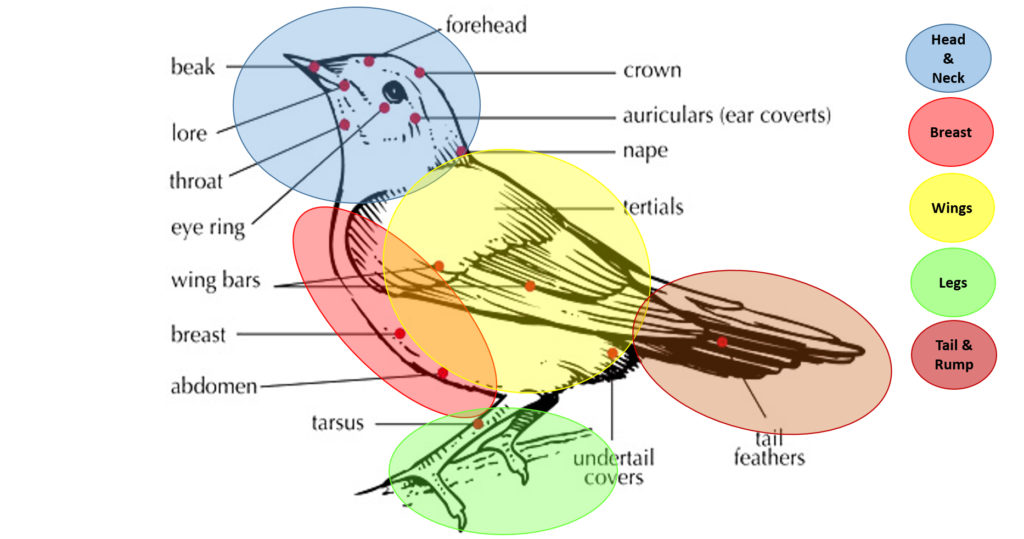 The main parts of this region are 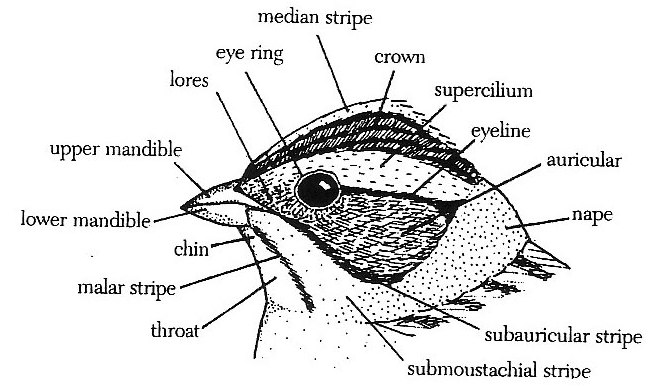 Crown: Top of the head is called the crown. Some birds have a flat crown while some can have a tuft at the back, some can have crest that are permanent or temporary.

Eyes : This is like an human eye but minus the eyelids. There is the Cornea & Eye ring, just like mammals. The colour of these parts is important for identification of bird

Lores : This is the area between where the beak joins the face and where the eye starts

Beak : This consists of upper mandible- MAXILLA and lower mandible…The shape and colour help in identification of the bird (http://ogaclicks.com/wordpress/all-about-beaks)

Eye line : The line that extends from back of the eye towards the nape

Ears : Palced on either sides of the face  usually covered with feathers. An auricular, or ear covert, are the feathers that cover the ears of a bird

Throat/ Chin : The area below the face that joins the breast. A distinct line at the lower edge of the auricular is called a mustachial stripe. A streak downward from the bill, behind the throat, is called a malar stripe

Breast : This is the region comprising of Chest & Belly. This connects the vent to the Throat. Presence/absence  of streaks, Colour, size are some features that help in Bird identification. This area plays important part in identification of the growth of bird from Juvenile to Adulthood

Wings : The wings are perhaps the most important feature for identification. They are covered with flight feathers ( Remiges)  They are broken into three area Primary, Seconday and tertiary. These areas are covered with protective feathers and they are called Coverts  hence Primary covert, Secondary covert  and Median coverts.. The pattern on the wings on top as well as at the base helps in Identification of birds. (For further reference http://ogaclicks.com/wordpress/wing-theory)

Legs : Most birds are digitigrade animals, which means that they walk on their toes, not the entire foot. The Bird legs consist of many fused bones and are similar to Mammal legs in bone structure. The legs perform various tasks and are adapted to the birds lifestyle. The birds have strong toes that end in Claws in most of the birds. The claws size, arrangement of claws and in some cases the colour of the claws help in Bird Identification.