India is home to over 1300 species of Avian . Each one has adapted to its surrounding leading to a wide variety of   behaviour. One such aspect is feeding methods. The method followed by a species to feed is dependent on

The various types of feeding methods are

Gleaning : This behaviour is about taking small insects / invertebrates directly from the vegetation like grass, leaves or barks.

This is usually exhibited by passerines and birds with Rictal and/or nasal bristles to protect their faces from the prey. This habit can be further classified as 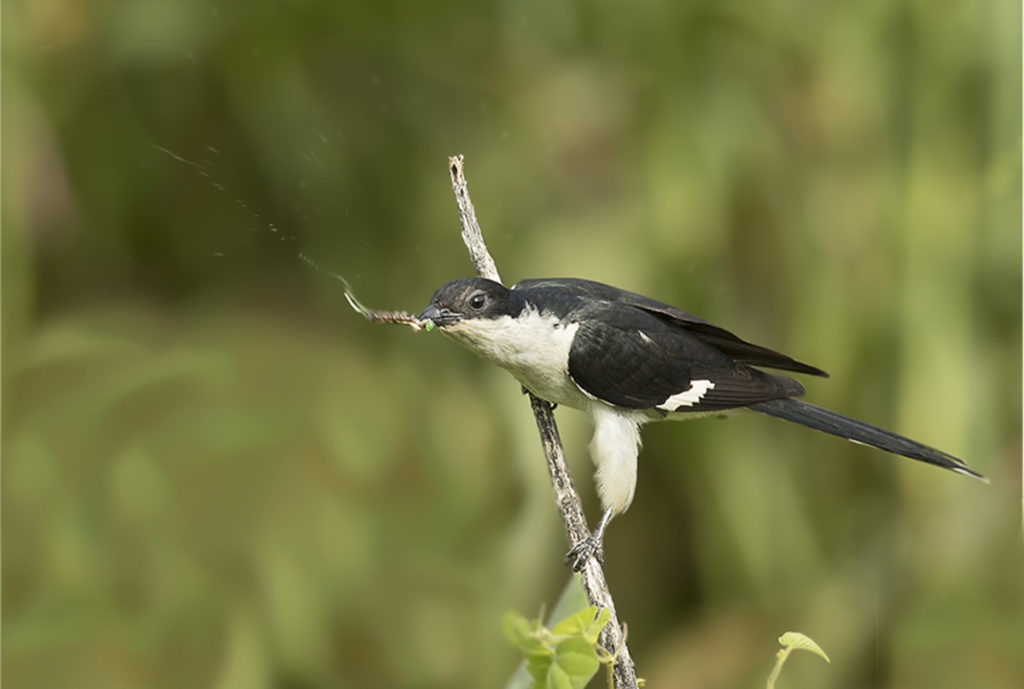 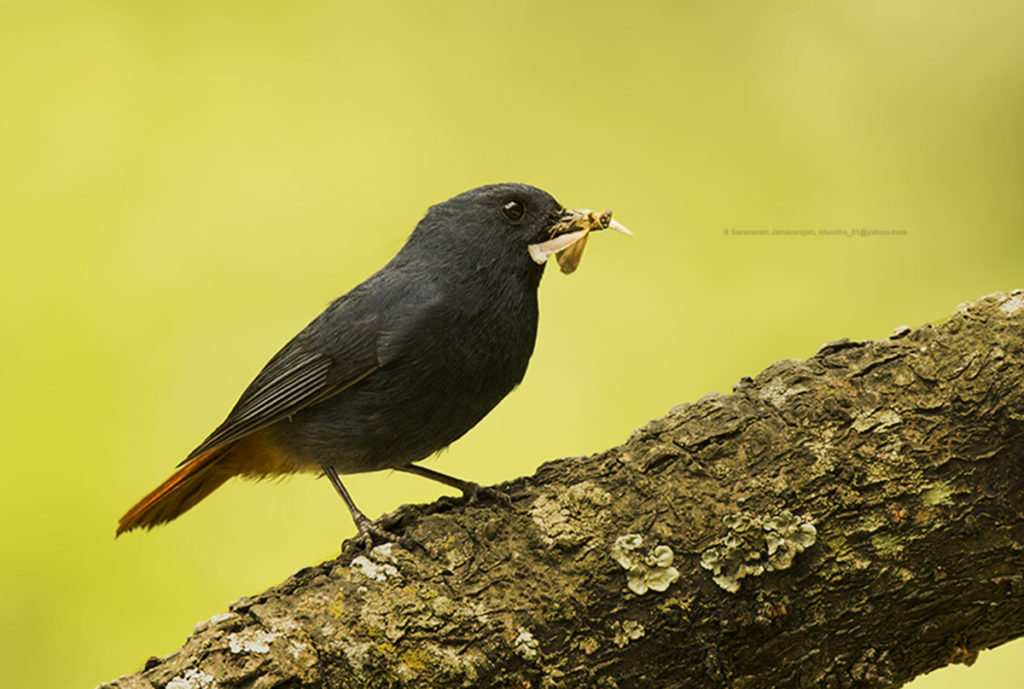 Aerial Capture : When the prey is captured in mid air it is termed as aerial capture. It  depends on the type of prey , invertebrate or avian   to classify this method as 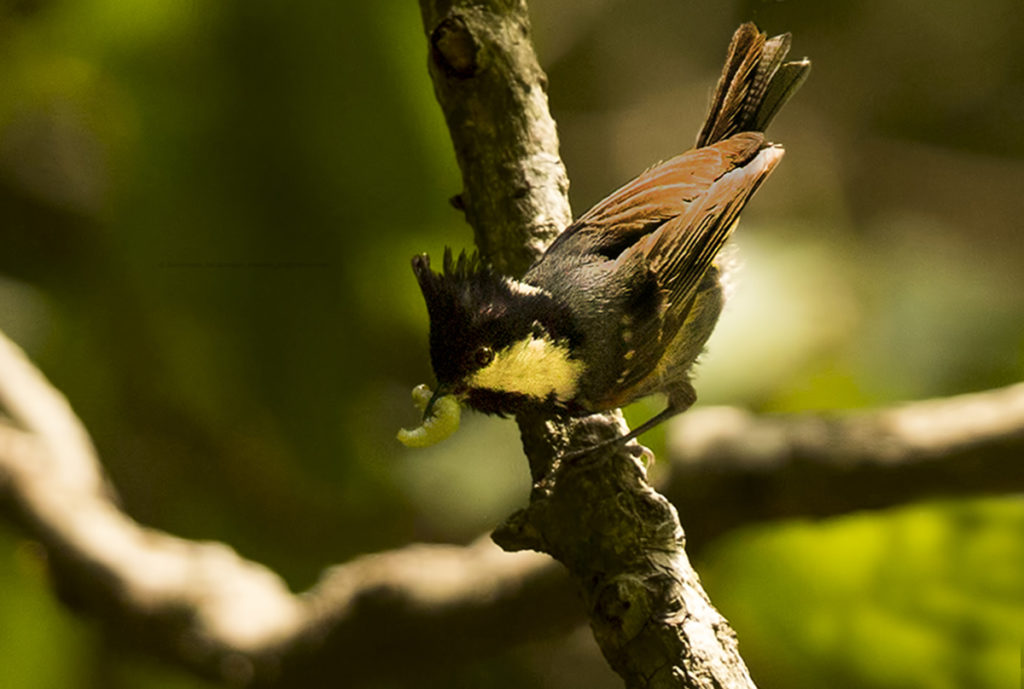 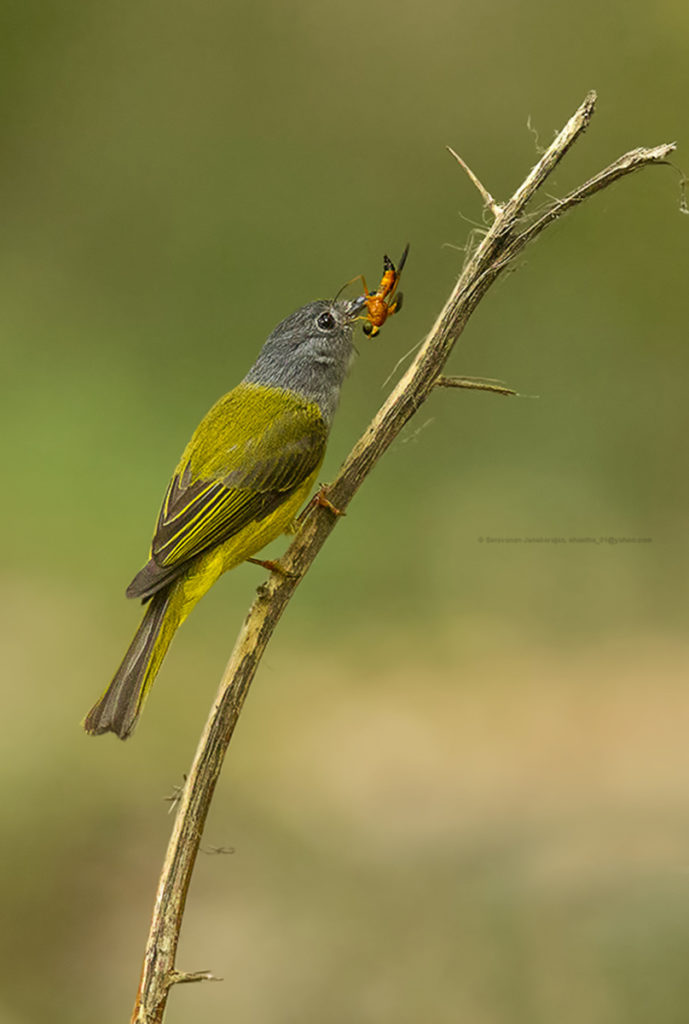 Diving : This is exhibited by birds of water as well as birds like Raptors and Kingfishers. The diving is categorised as 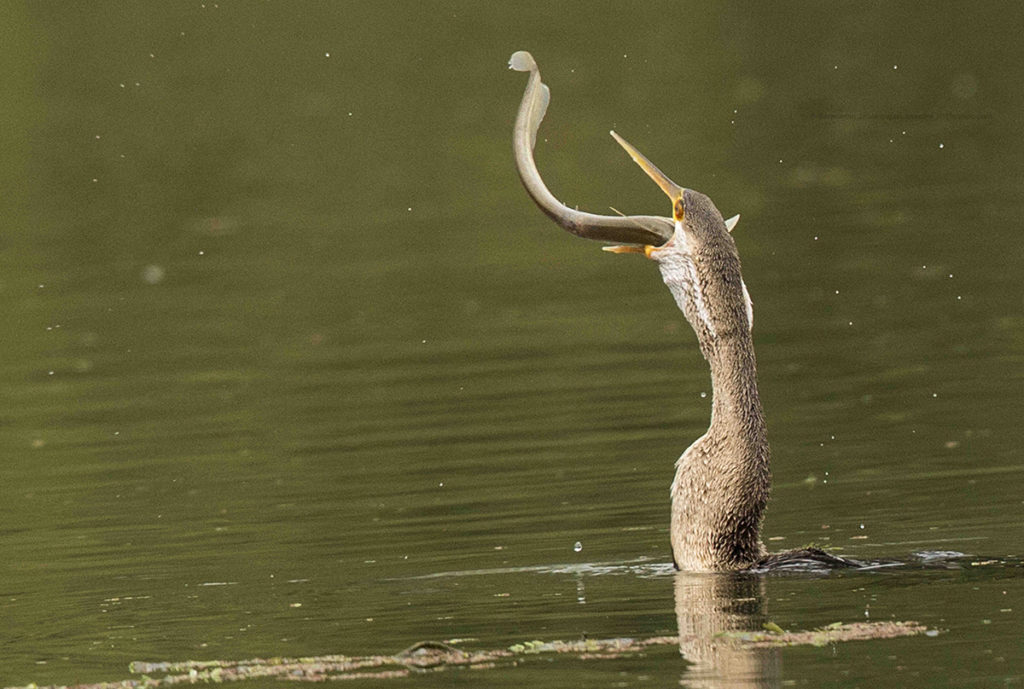 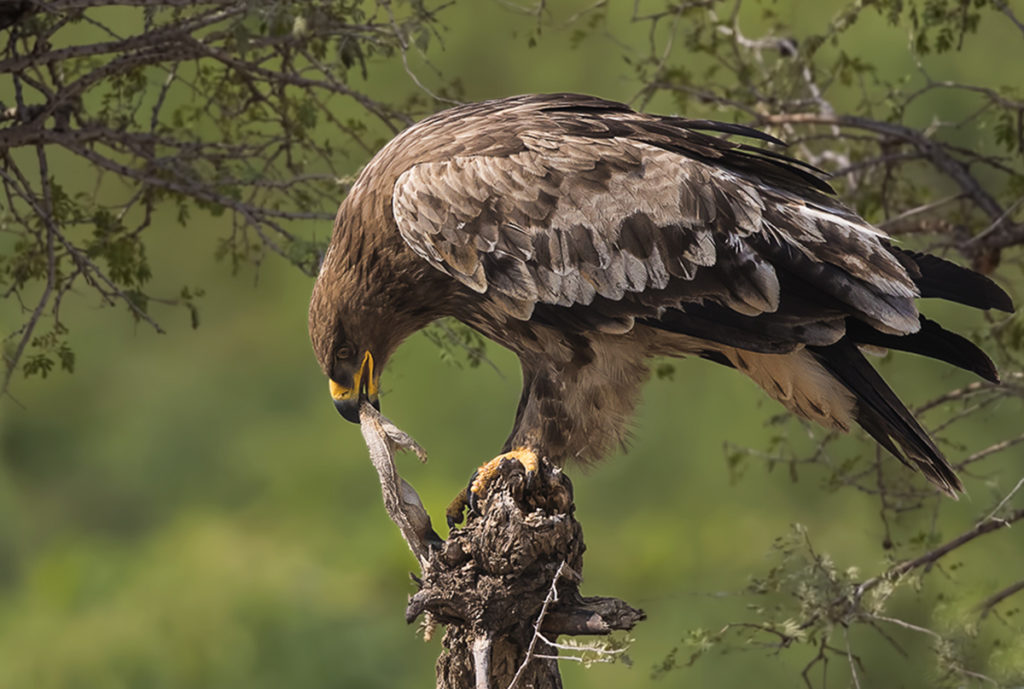 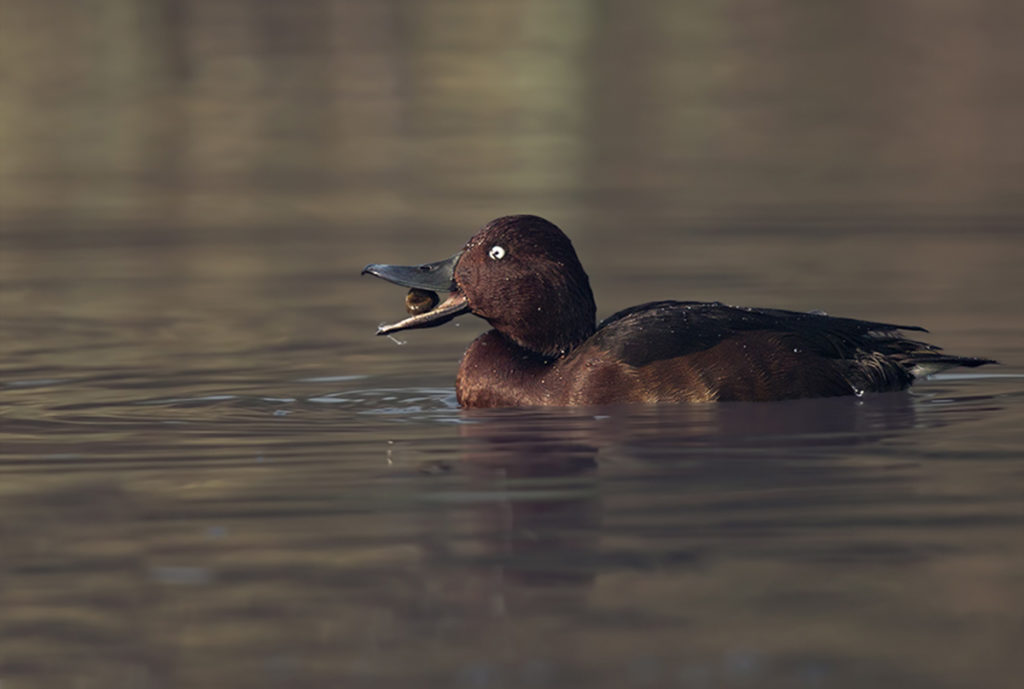 Probing : This is a technique where a long , narrow  bill that is straight pointed ( Godwit),  decurved  ( Curlew) or recurved ( Avocet)   is used to probe the small holes and cervices in the ground to catch invertebrates hiding in them. These bills are filled with Tactile sensors ( Touch ) and Olfactory sensors ( Smell). As the birds cannot see inside the holes they depend on the sense of touch and smell. As this method is more of Hit and miss , multiple attempts are required to catch prey hence the birds keep doing this for a major part of the day.

These birds are found in groups with varying shapes and lengths of the beak. The males are found to have sturdier and longer  bills and hence they also probe into deeper holes and cracks. The “Bill Dimorphism” ensures that they do not compete  for  the food available at same depth and all of them can easily live in cohabitation 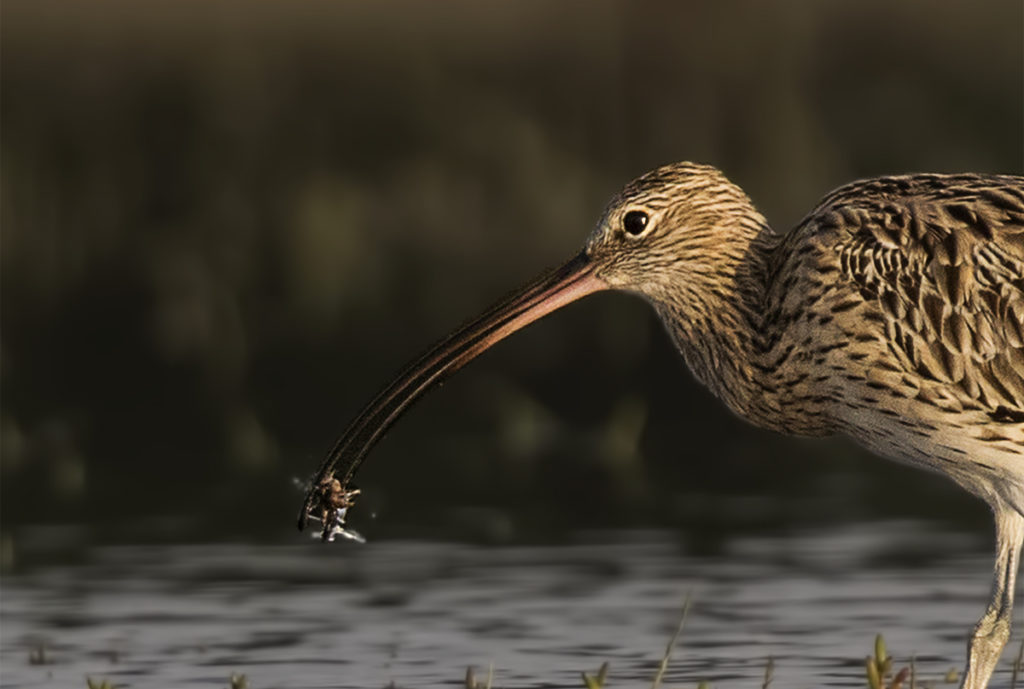 Chiselling : This technique is exhibited by birds where the prey  has to be extracted from tough protective layer or cover. Like in the case of Woodpecker and Oystercatcher. The woodpecker will listen to the movement of insects inside the branches of the tree and then once it has marked the area of the insect it will start pounding the area with its tough beak . This will chip the wood away and expose the wood borers and other burrowing insects. The woodpecker has some amazing adaptations to help it achieve this feat. You can read about them in detail in  www.

The oyster catcher will prise the prey from its shells by attacking the vulnerable part of the casing. The laterally flattened bill with rounded tip  helps in chiselling away at the muscles which help keep the shell together. This exposes the tasty prey inside. 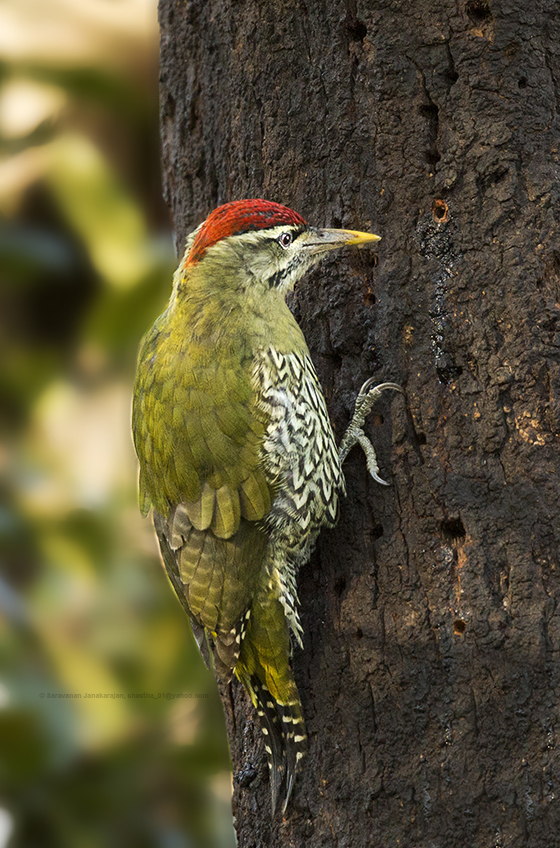 Stalking : This technique involves the bird to stand still and then when the prey comes within striking range ,lunge forward and catch the prey. This form of Ambush Hunting is seen in Storks, Herons and Egrets. These birds have specialised long necks. The cervical vertebrae have small cervical processes called cervical ribs. The muscles attached to them help the bird extend its neck in a striking move within seconds. The prey is usually caught in open bill and consumed there itself.

While waiting for the prey the birds might move a single foot forward or back to create disturbance in water and make the hidden prey come out.

While most birds use visual cues to catch prey, the birds like Spoonbill will open their bills, submerge them  and sweep them side to  side  in the water . The moment any prey touches the bills they will snap shut trapping the prey.

An interesting technique called wing casting is used by these birds. The wing closest to sun is opened thus casting a shadow in the water. The prey in the water will move towards the shadow to escape heat and thus gives the bird a more than fair chance to catch them 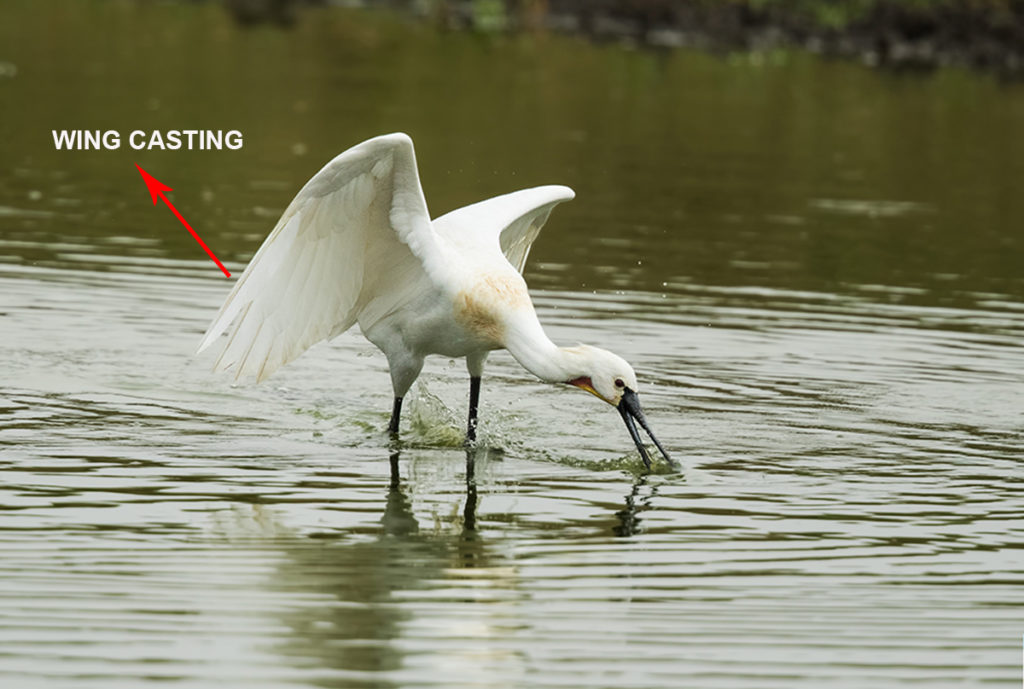 Sifting /Filtering : This is a technique where the food particles that are very small to be caught individually  are removed from water or sediments. This can be seen in Flamingos, Shovlers and Avocets. The  Flamingos use their robust tongue as piston to circulate water in and out of their Kinked beaks . The Kinked beaks will filter out small organisms like brine shrimps, diatoms and brine flies from the Muddy sediments and  lower water layers in case of Greater Flamingo and Cyano Bacteria from the Upper layers and water Surfaces in case of Lesser Flamingo. The bill has a comb of finely spaced plates or Lamellae that separates the food  particles from water, these food particles are then pushed into the throat by the spiny tongue. 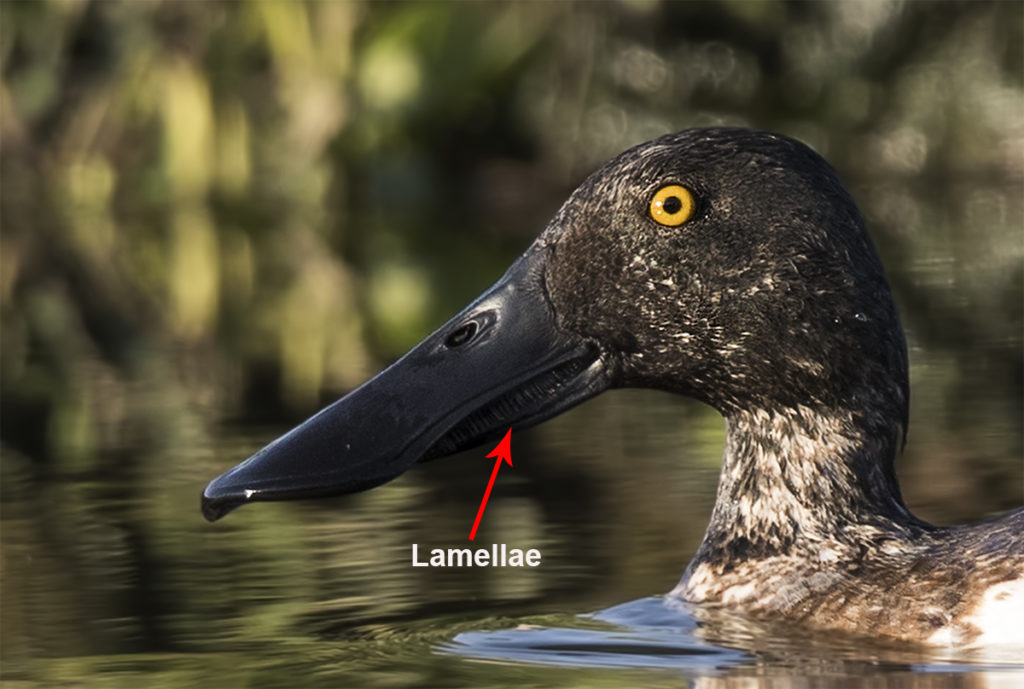 The Pied Avocet uses a variety of techniques to feed, one of it is filtering method called Scything.  They eat larges prey than flamingos like Midge larva and small crustaceans.

Grazing : Primarily done by Ducks & Geese. They eat the grass shoots and small leaves   by biting it off using the sharp edges in front of the bill. 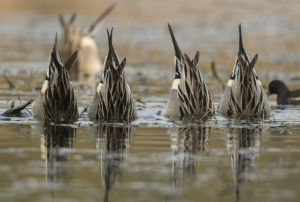 This is done by mainly Ducks  and in this process the bird rapidly opens and closes its mouth in continuous manner just below the surface of the water. Food items are bitten of in small measures  necessitating  rapid repetitions. This   method can be performed on variety of water sources like Deep, shallow, Murky clear etc depending on availability of food source. Depending on the food source availability this  method is done by birds swimming slowly along surfaces with only bills submerged or with entire head submerged or by swivelling forward and submerging the whole front half of the body in water to get to deeper items. This is called UP ENDING 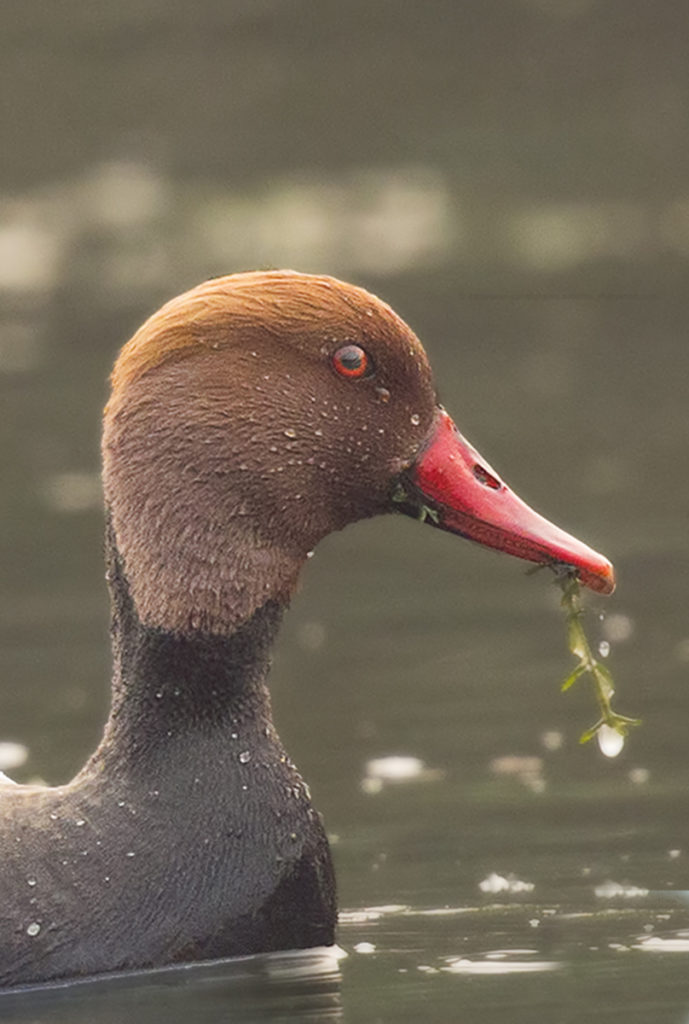 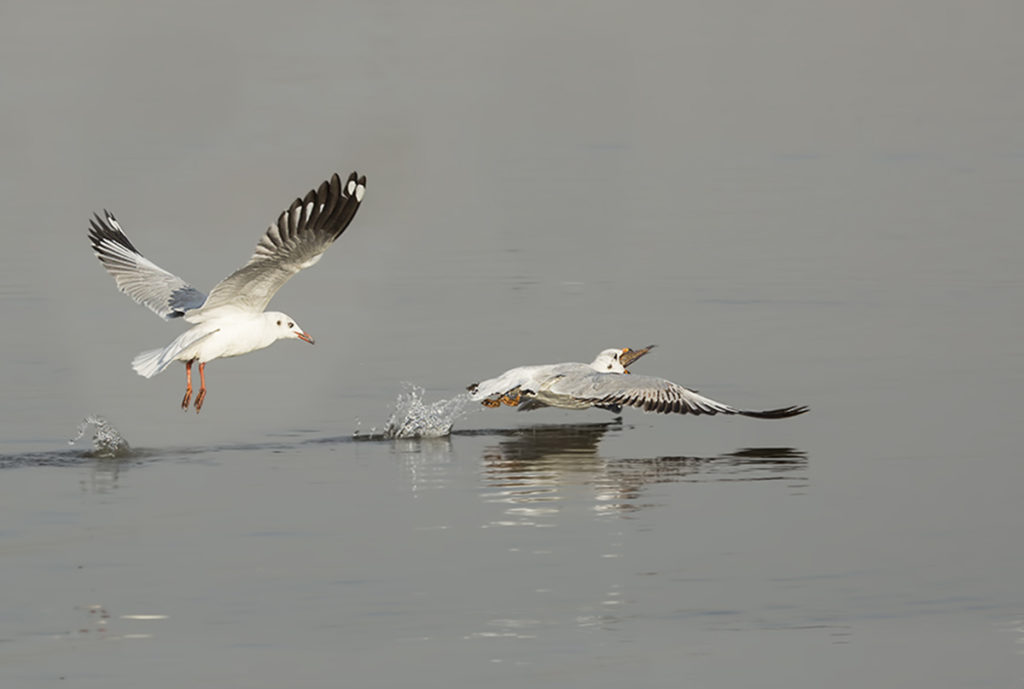 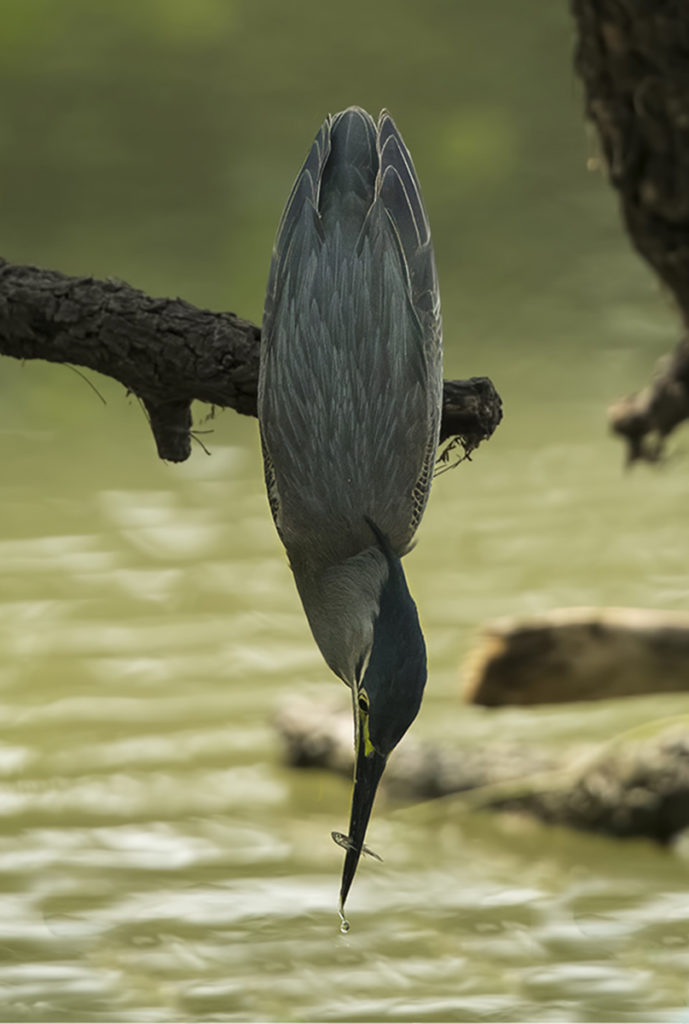 Nectar Feeding :  This process involves feeding on Nectar from  within the Flowers. Humming Birds are known for this behaviour, but in India they are replaced by Sunbirds and flower Peckers. They Sunbirds use their long de curved bills to reach inside the flower and suck the nectar. The sucking can be done both as perched or as hovering . The hovering takes away a lot of energy hence only in rare cases the birds will hover. The sunbirds use their long tounges to suck up the necter. 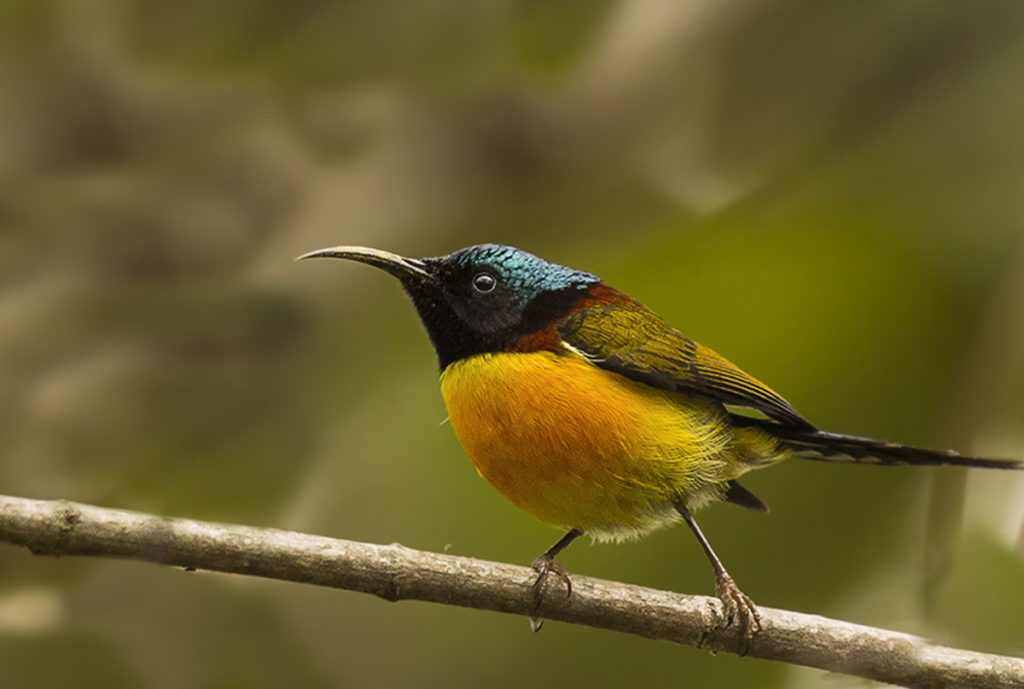 The flower peckers and White eye will also feed on nectar. They will  puncture the bottom of the flower and lap up the oozing nectar with their brushy &  spongy tongue.

Ground feeding : This process is used to feed on food particles on the ground . This is adapted by mostly insectivorous and Seed eaters. Many birds have their own method of searching for food on the ground.

The Bunting will scratch the surface with both feet simultaneously and plie up the debris backwards . Then it will go thru the debris to look for food. 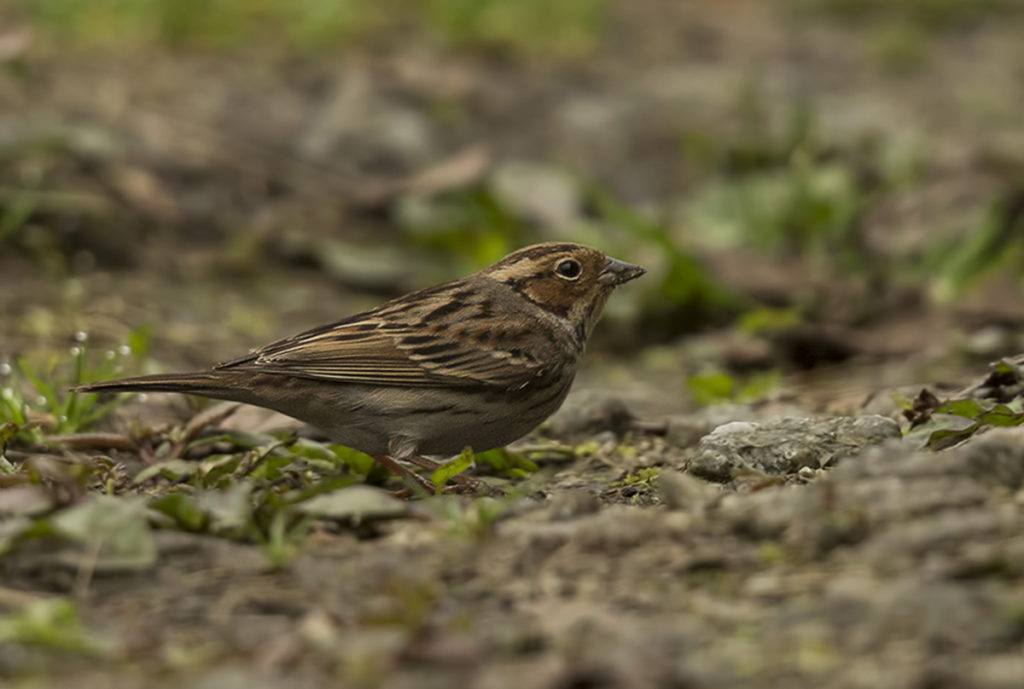 The Lapwings and Plovers will detect a prey visually and run towards it fast and come to an abrupt stop near the prey . This run –stop- search behaviour will drive away other prey  but will help them concentrate on the one detected visually. 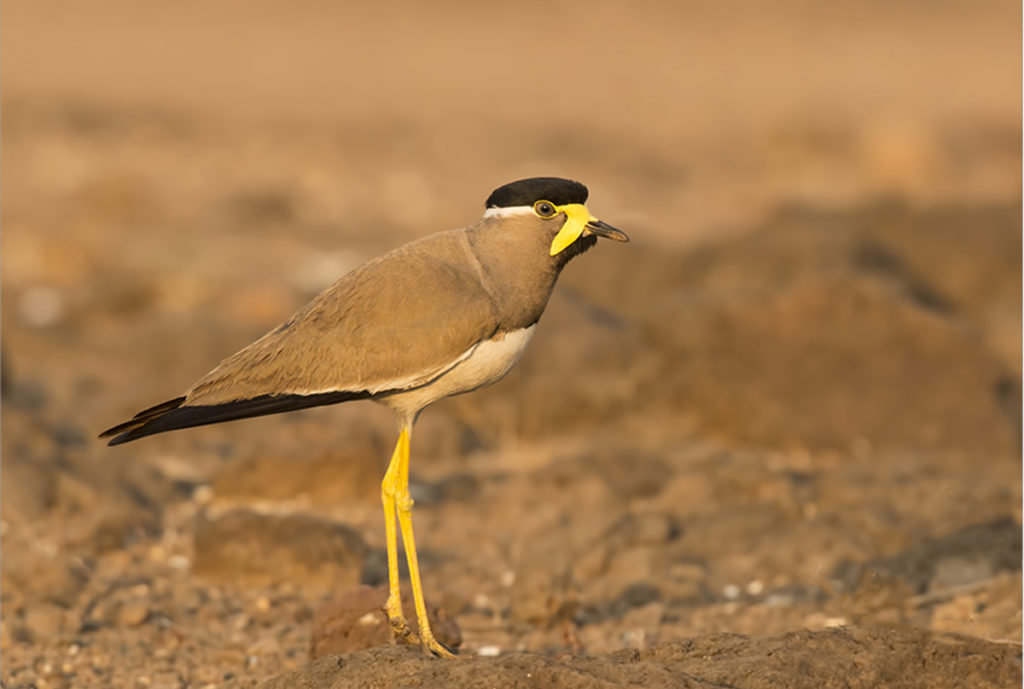 The thrushes will overturn leafs in search of insects. This is leaf tossing

The Ruddy turnstone will overturn small stones to look for Crustaceans. This is done with help of strong beak  that is used both to overturn the stones and catch the prey by probing in the hole.

Hovering : When the bird stops in mid air over a spot either using the wing flaps or a favourable head wind, it is said to be hovering. This is exhibited by a variety of birds. But one must take into consideration that this is a very high energy consuming activity. Hence in absence of favourable head wind not many birds will exhibit this. The pied Kingfisher is one bird that will exhibit this method even in the absence of head wind. They will hover over spots that are rich with fish and then on spotting one, they will draw their wings backwards and dive into the water , catch the fish and use the monetum of dive to beat the bouancy and come out with the prey.  As the bird hovers it does not depend on any perch  and hence can choose good fishing spots. The bigger fishes avoid shallow waters and areb out of rang for many birds but the pied Kingfisher hunts them by hovering. 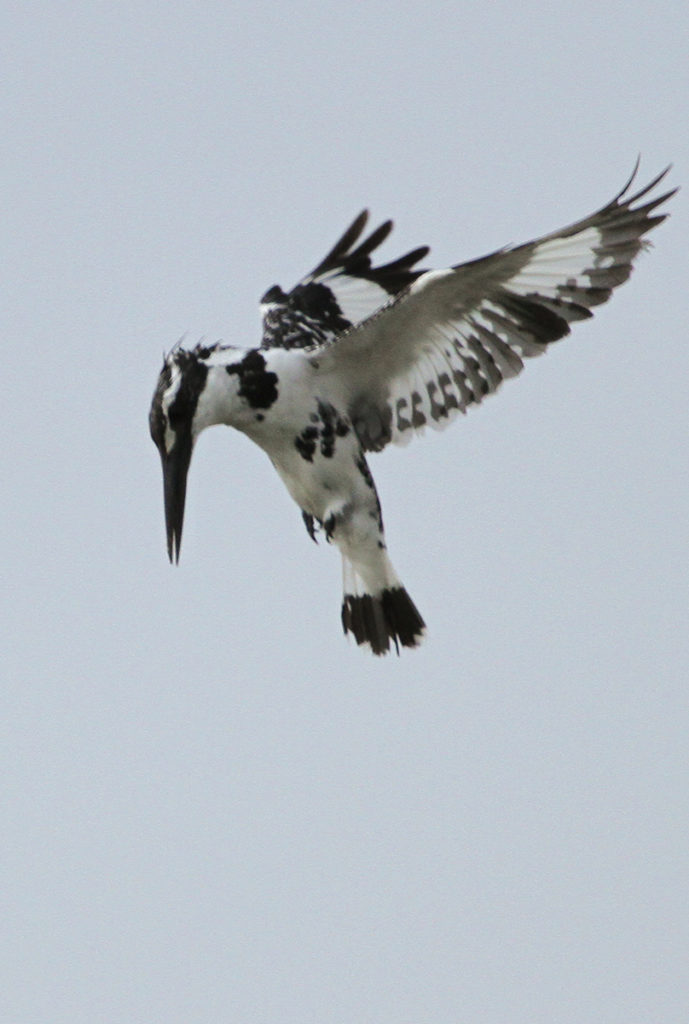 The other big bird that exhibits this behaviour is the Black Shouldered Kite.

Some birds like Kestrel, Hawks, Gulls and terns  will also exhibit hovering

Small birds like Sunbird will also hover but usually to catch the bugs inside the flower rather than fort nectar .

Smashing: This method involves breaking hard food items like Hard shelled Molluscs, millipedes, snails,eggs and even bones by hitting them against hard surfaces.  The Bearded Vulture will take bones high up in the air and drop them on to the hard rocks  for breaking the bones and getting the Marrow out. 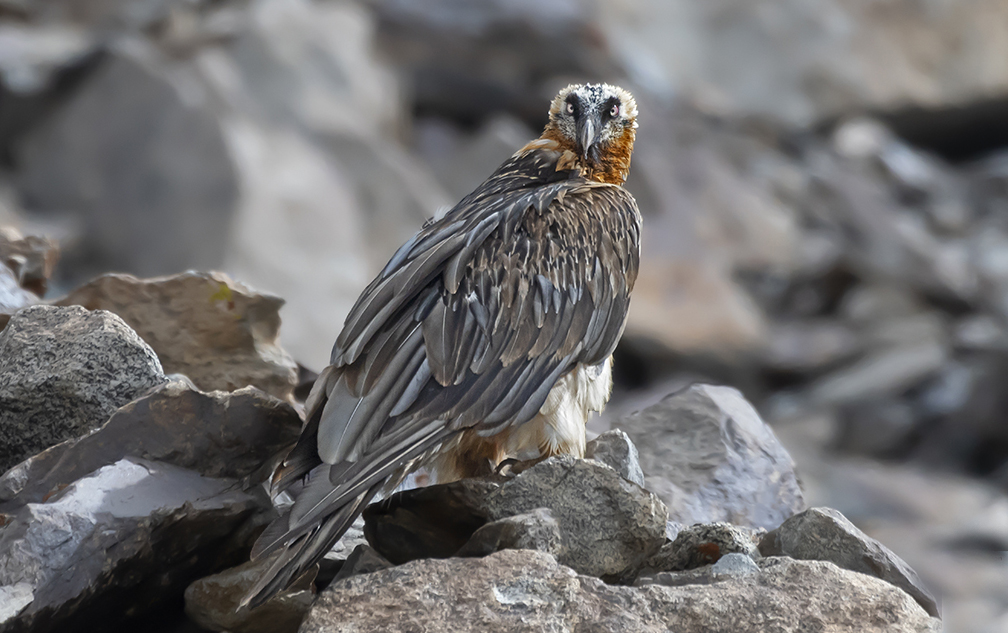 The Egyptian vulture will carry small stones and drop them on the eggs of the ostrich to break then open.  Crows and raven will carry eggs and tap them against hard branches to crack them open.

Piracy : As the name suggests it is all about stealing the food captured by another bird. This is called Kleptoparasitism. This can happen within species  ( Gulls stealing food from each other) or between many species like the various water birds fighting for the spoils.

The most innovative method is deployed by Drongos. When they see a small mammalian predator group like  Mongoose, jackals , small cats sitting on prey, they let out the call of a big predatory bird . The mammals scamper for protection and the Drongos steal the food. 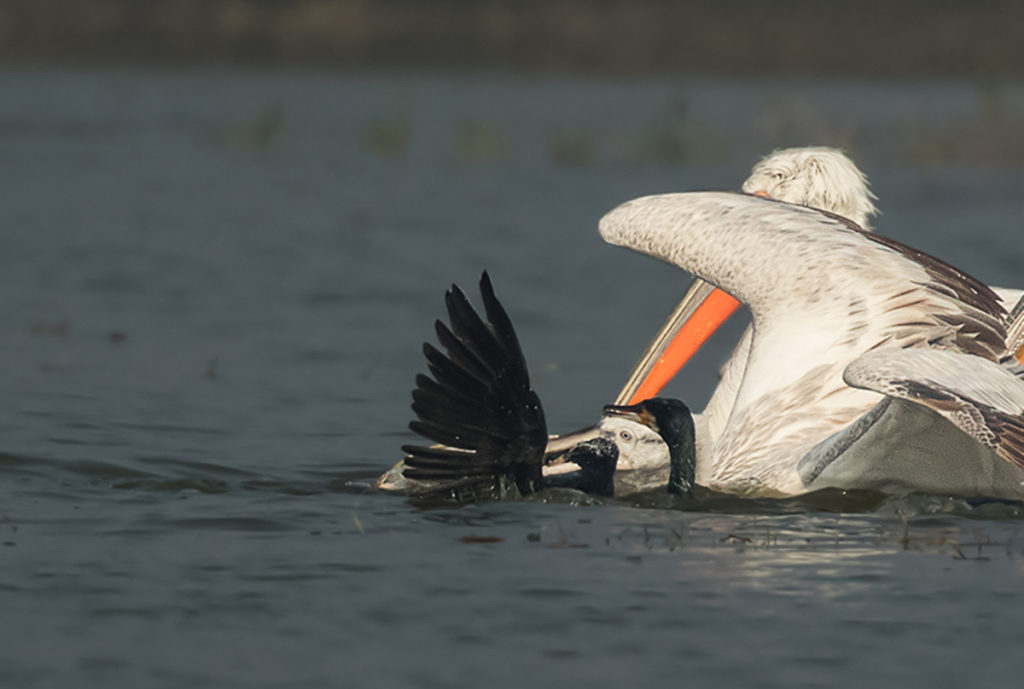 Commensalism / Symbiosis : This is a process of feeding in which one species feeds from the other species without affecting the other species ( infact helping it in many ways).  The birds are known to eat away the pests on the outer skin on mammals. This can be seen commonly when the Myna and Drongos move with the cattle. They also get to eat all the insects unearthed by movement of the cattle. The Cattle egrets also benefit form this type of feeding 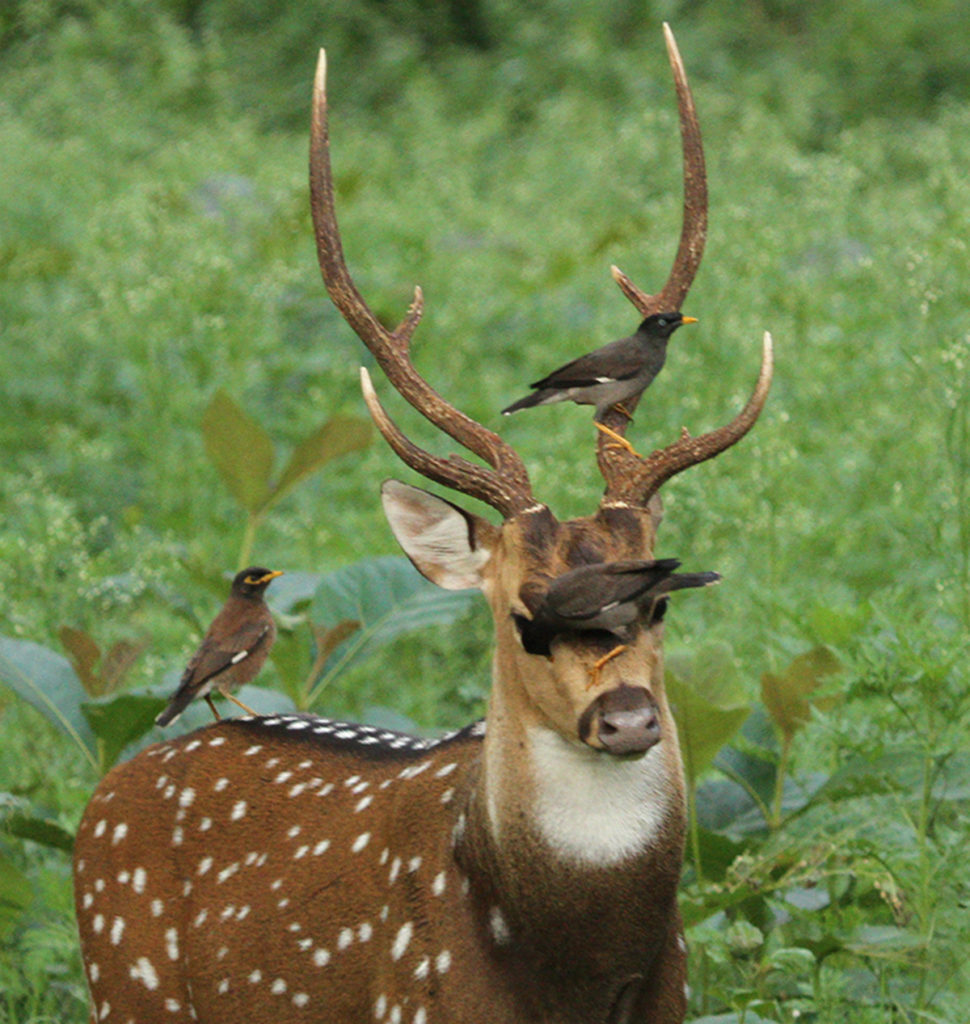 Co-operative feeding : In this process the group of birds act in a coordinated manner to corner prey and then they all feed on them. This can be sen in the waders and water birds where they walk in water towards the shore to move the fish and other crustaceans towards the shore and they can then feed on them. The Pelicans can be seen fishing in  a coordinated manner to catch the swarm of fish. 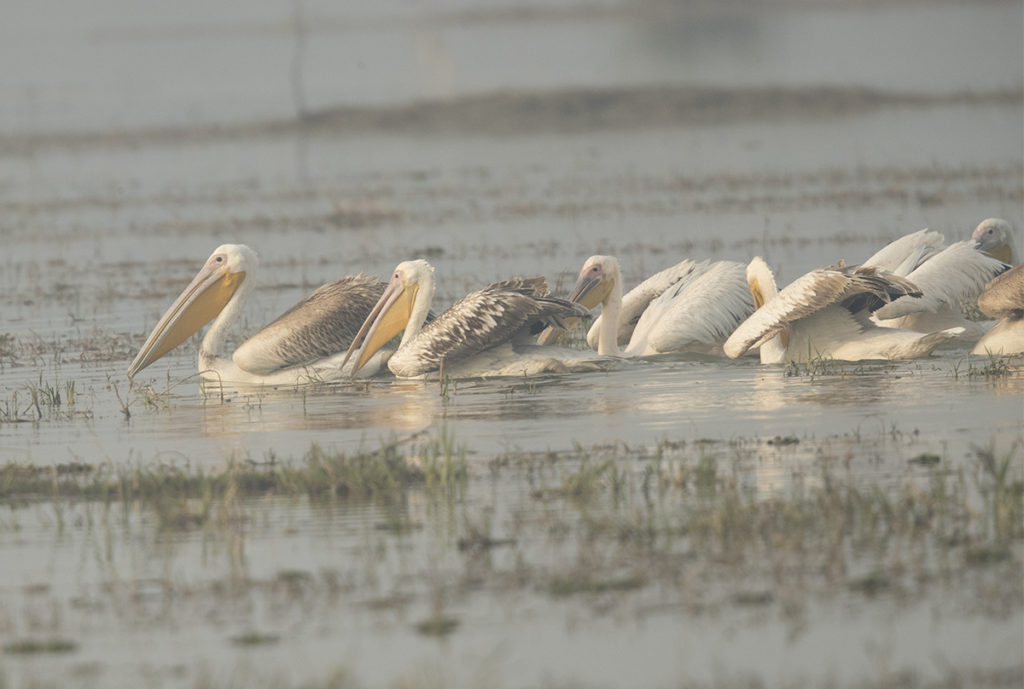 Scavenging: This feeding method happens when the birds end up eating the carcass . It is different from Kleptoparasitism in the fact that the carcass is obtained by opportunistic search. The carcass is found using sight ( as flying in thermals) or by scent. The birds which scavenge have adapted to eating Putrid flesh and the stomach enzymes to digest them. They also use the opportunity to fill their stomach and crop quickly   to avoid any conflict. They fly away to a safe perch and regurgitate the food and eat it peacefully. Birds like Vulture, Raven, Eagles exhibit this behaviour 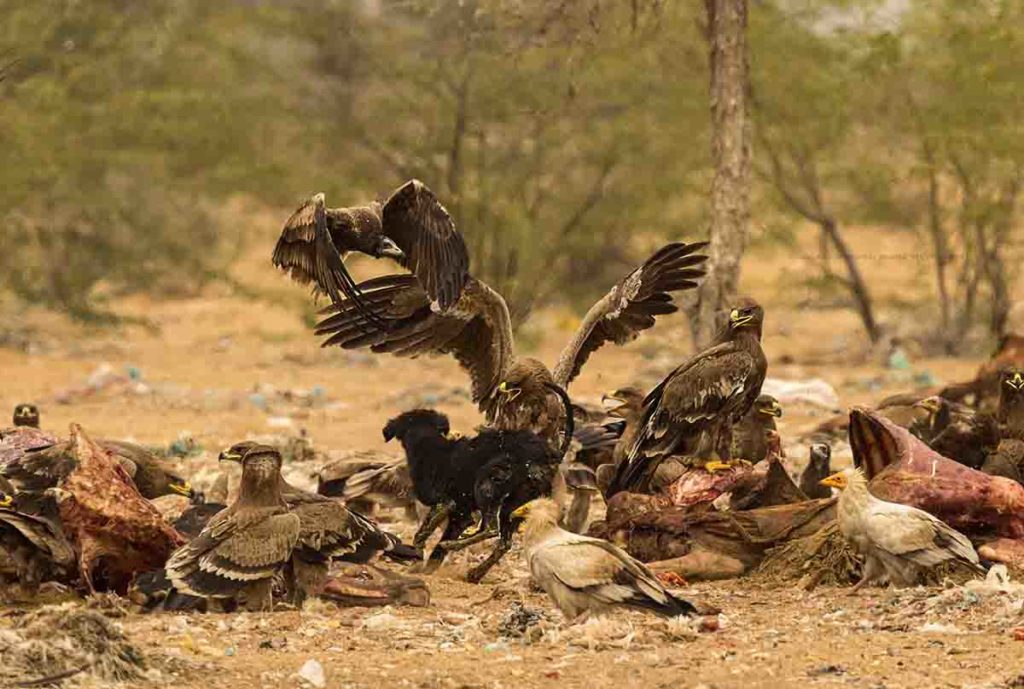 So many methods to feed each species basis their habitat and food type. Nature has adapted them with Beaks, Eye sight, claws & talons  etc. to survive in the race for prey . They also cohabitate in same area and feed on different prey to reduce competition. Such wonders of nature are to be admired and protected by us.