Birds are the only vertebrates that have 100%  Oviparous reproduction ( 100% egg laying). In some reptiles and all Mammals the young ones develop within the body of the adult mother, while in Birds the maximum development of the young happens in a hard-shell container that has all the elements necessary for the development of embryo like Oxygen, Nutrients etc.

Why do birds lay eggs? :

The female reproductive cell is call OVUM. This is joined to a YOLK parcel in a tube like organ called OVIDUCT.  The YOLK contains nutritional package that is required for the chick to develop within the egg. Then the male reproductive cell called the SPERM fertilizes with the OVUM .The fertilised OVUM along with the YOLK are then covered with a translucent substance that is rich in water and protein. This is called ALBUMEN, this is provides the embryo with aqueous medium required for it to grow and also act as a buffer and a shock absorber protecting the embryo

The embryo is connected to Yolk and Albumen by a “Umbilical chord” equivalent called CHALAZA. This whole package is further surrounded by two tough membranes called  CHORION and ALLANTOIS. This  whole parcel then travels to a part of Oviduct where it is covered with a Shell of Calcium Carbonate . The actual shape of egg is formed here and the egg is either Smooth or pitted . The egg at this stage is either white, off-white or blue. 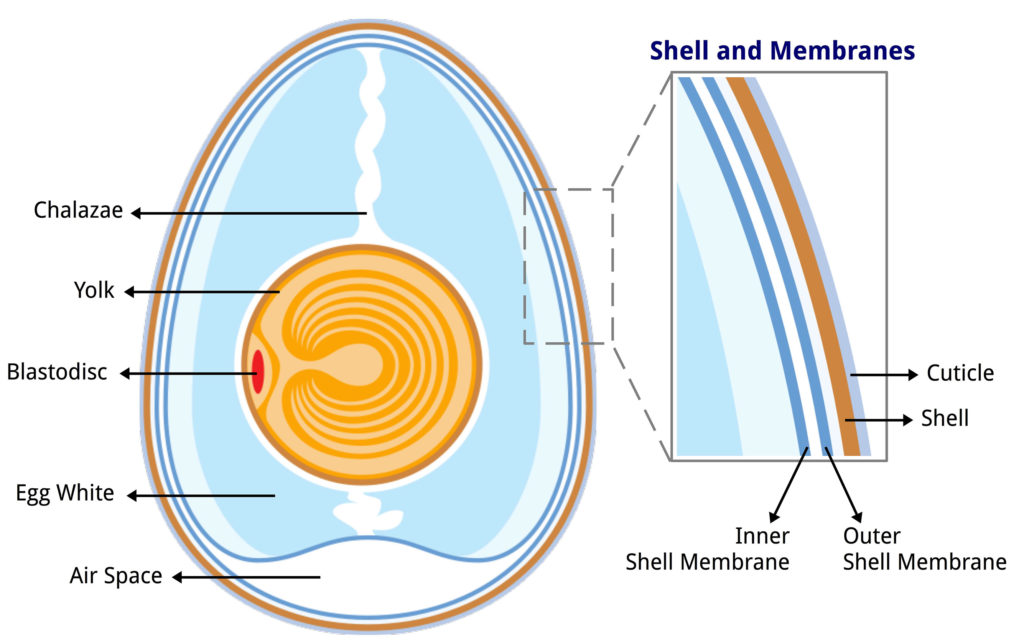 Till here the process is same for all birds. From here on depending on the family , surrounding and nesting habits the eggs are provided extra features

The eggs then passes through a section of Oviduct where the glands coat it with yellowish pigments that buff the shell and darkens it resulting in Beige, Cream or Off-Brown  colours.

The egg is then passed through a section of Oviduct that paints it in patterns and other colours to provide it the camouflage effect. This depends from Species to species basis their nesting and surroundings

The egg laying process is a very delicate and strenuous one for the bird. It can take anywhere between a  day to a few days depending on the size of the bird and its eggs.   But one thing is common, each egg has to complete its sequence from Fertilization to formation to ejection from CLOACA before the next egg is formed. This means that the egg formation  cannot run parallel to each other  and has to be sequential and that too only after the completion of the previous egg.

This is because of many reasons. The egg formation like flying is a high energy consuming process and the bird with its high metabolic rate need rest  to get recouped and be ready for it again.

The bird is very vulnerable during this stage and hence will not want to expose itself to the predators for long . So once the egg is out it can defend itself , something that it will not be able to do if there were multiple eggs in the OVIDUCT in various stages.

Also as the birds can store the Sperm for many days within their body , they can use it for fertilization as and when required and this make egg laying easy

The whole process of Egg formation in a diagram 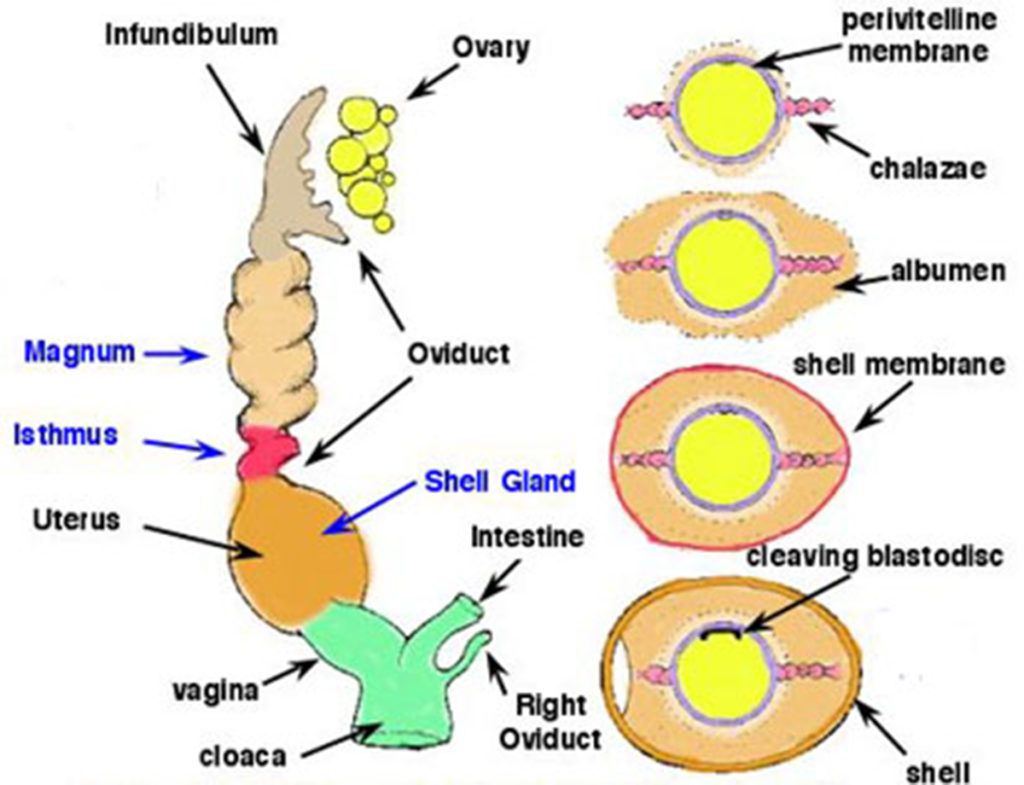 How are egg coloured?

Eggs get coloured from various methods  . Some are coloured in Oviducts by special glands so that they can merge with the surroundings and get a camouflage . Espl in the ground birds. They also have patterns drawn on them so that they can look like stones, animal droppings or any other rubble.

Eggs of Cormorants, Egrets, Herons and Storks get coloured by the faeces and the regurgitated food droppings on them by the adults and buy the firs born siblings. They stain the egg  with these wastes.

Lammergeirs or Bearded Vulture get their bellies coloured red/orange  due to roosting  in crevices in cliffs. These are Iron rich soil that stick to their feather barbs. When these feathers are wet and as the bird sits on the eggs , they get stained orange.

The birds that lay eggs in dark Holes ( ex Owls) have bright white eggs so that the eggs can be visible to them in the darkness and they do not step on them by mistake   .

The Birds have to consider a lot of factors to adapt to an egg shape. There are three main shapes of eggs. 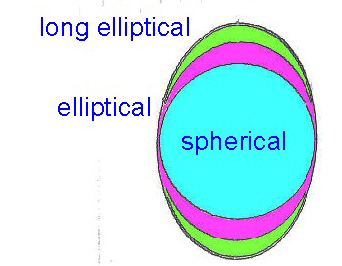 Oval : Narrower at one end 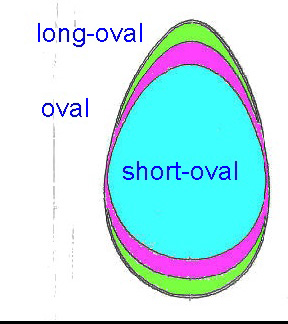 Pyriform : Triangular ( Like a top) with the narrow end tapering to a “rounded” point 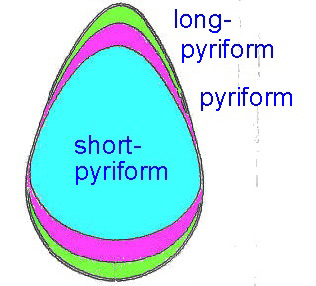 Internally the egg has to pass through the narrow oviduct and hence an oval shape is a better choice. But the spherical shape allows the most optimal use of space, strength and integrity to structure and weight saving for a given volume. But the most critical factor is the shape of nest and its surroundings.

Birds with open nest , nest on cliffs  , Nesting on floating plants and high points will have a pyriform shaped egg as the egg doesn’t tip over the edges of the nest. The egg if knocked by wind or some disturbance will spin like a top and topple with he narrower end towards the inside of the nest. This shape also allows the birds to put all eggs ( Max of 4) together and incubate them easily. Birds Like Skimmers, Jacana, Gulls, Avocets, terns etc. have this shaped eggs

Birds with Cup, Saucer  or Bowl like nests where the shape of nest prevents the eggs from rolling over will have Round or Oval eggs.

Status of young : There are two types of Chicks  of birds