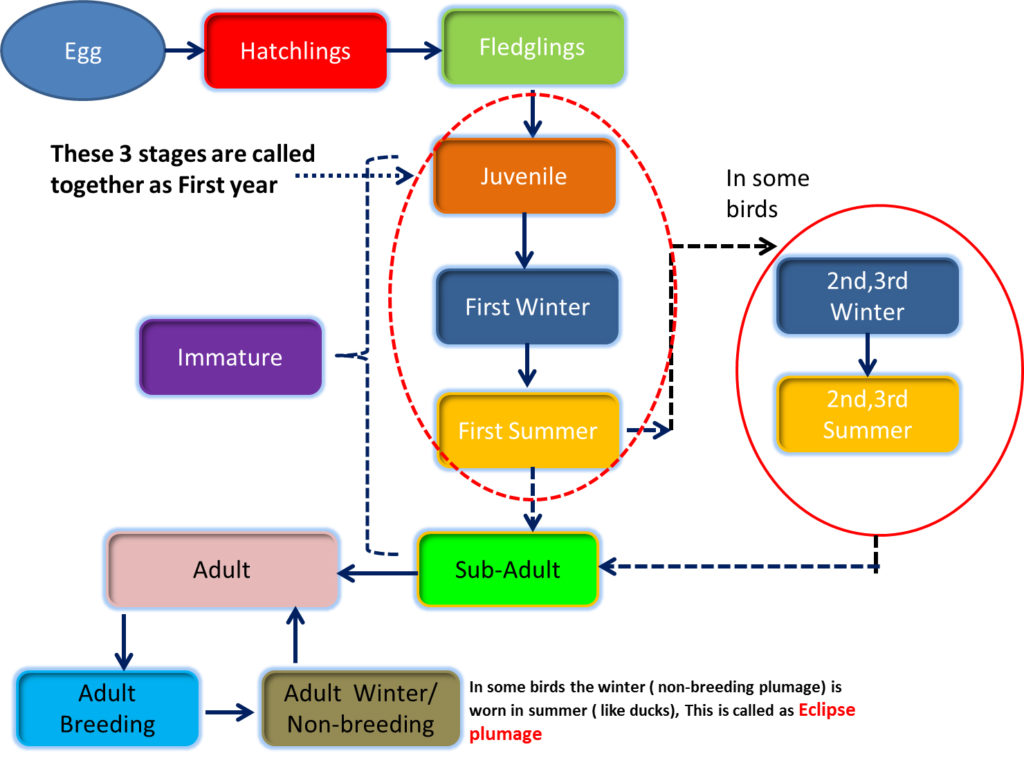 A baby bird that has just hatched is called a hatchling. While the hatchling is growing in the nest and being fed by its parents we call it a nestling

A fledgling is a young bird that has grown enough to acquire its initial flight feathers and is preparing to leave the nest and care for itself. Young birds that have already left the nest but do not yet have all their adult plumage and are still fed by the parent birds for several days are also referred to as fledglings. The term is generally used only for passerines, however, not for precocial such as ducks, geese, quail or shorebirds that leave the nest very quickly but still require intense parental supervision and care.

A general and collective term that includes juvenile, first winter, first summer and all subsequent plumages until the non changing adult (definitive) plumage is acquired.

First Year: This term applies to birds that molt once per year. It follows the post juvenile molt and is retained until the first post breeding molt. First year birds do not have separate first winter and first summer plumages. In many birds, first year plumage is worn from late summer or early fall to the following summer. First year plumage is adult-like in many species, especially passerines. Many breed in this plumage. First year birds often can be separated from adults by retained juvenile feathers. First year is also used as a general term to include birds in juvenile, first winter and first summer plumages.

Juvenile: it is the first immature plumage. It is the first covering of true contour feathers following the natal down(s), or in certain species it succeeds the naked nestling stage without the natal down. The Juvenile plumage is worn briefly in most passerines, but much longer in, hawks, gulls, shorebirds and others. In most birds, the juvenile feathers appear looser, woollier, and differently coloured and shaped than subsequent stages.

First Summer: This term does not refer to a bird in the summer of its hatching year, but to the next summer in its second calendar year. It refers to that plumage following the first winter plumage in birds having two plumages a year. It is acquired by the first pre-breeding molt and retained until the first post- breeding molt. First summer plumage is adult-like in most species. Most passerines breed in first summer plumage, but they are not adults because they retain juvenile flight feathers. Many first summer birds are separable from adults in the field by their duller or incomplete plumage colour and molt contrast. First summer is sometimes called first breeding plumage.

Second & third Winter: Some birds that have two molts per year, such as large gulls, have recognizable second and third winter plumages.

Second & third Summer: Some birds that have two molts per year, such as large gulls, have recognizable second and third summer plumages.

Adult: Adult refers to a bird’s plumage, not to whether the bird is of breeding age. A bird is adult when it acquires its final or definitive plumage that is then repeated for life. Birds that molt once a year have only one adult plumage; they are not divided into adult winter and adult breeding plumages. The sexes are often alike in birds having only one adult plumage and many are dull and cryptic in colour. Birds that molt twice per year have two adult plumages: adult winter and adult breeding. The sexes are often different, particularly the breeding plumage, in species having two adult plumages. Most passerines breed in their second year before they acquire adult plumage; they appear very adult-like but retain the juvenile flight feathers. Accipter hawks frequently breed in their second year when they are in juvenile plumage. They are “adults” only in terms of reproduction, but not plumage. Birds wearing any retained immature plumage, even though breeding, are not adults.

Sub-adult: This is generally used to describe birds whose plumage is nearly adult in appearance, but shows traces of immaturity. It is most often used for birds that take several years to reach adult or definitive plumage, such as eagles.

Eclipse: This female-like plumage is held very briefly by ducks in summer and early fall, and is most noticeable in the males. Eclipse is really the basic or winter plumage, but is worn in summer by most ducks, except the Ruddy Duck which wears eclipse to late winter. Most ducks acquire breeding plumage in the fall, six or seven months before other birds. This shift in the assumption of breeding plumage appears related to courtship during fall and winter.