Of all the abilities that my Avian friends possess the most amazing one is their ability to fly. How they are able to defeat the forces of gravity is a question that intrigues all of us. In this article I have tried to keep this whole process as simple as possible using words we all can understand.

There are three forces that are required for anybody to defeat the force of gravity, they are:

Let’s see how the Aves are able to use a combination of these three forces to fly.

Feathers have made the flights possible for Aves. The structure of feathers is described in detail in www.ogaclicks.com/wordpress/feathers-usp-of-birds/. The feathers have very light weight and is called as Aerofoil, is slightly curved downwards at either ends .The entire wing of a bird ( Wing structure in detail can be understood by visiting www.ogaclicks.com/wordpress/wing-theory/) is covered with feathers that are called Flight feathers ( Remiges). The wing with its trailing edges of flight feathers is the principal aerofoil that makes the lift possible

As per laws of physics “faster the air moves over a surface, lower is the pressure exerted by it on the surface”

Using this principle on a bird with a “Convexly curved” wing structure facing a wind will undergo the following forces:

It is estimated that 60% of overall lift is because of “Suction” from above the wing and 40% from the push from below. 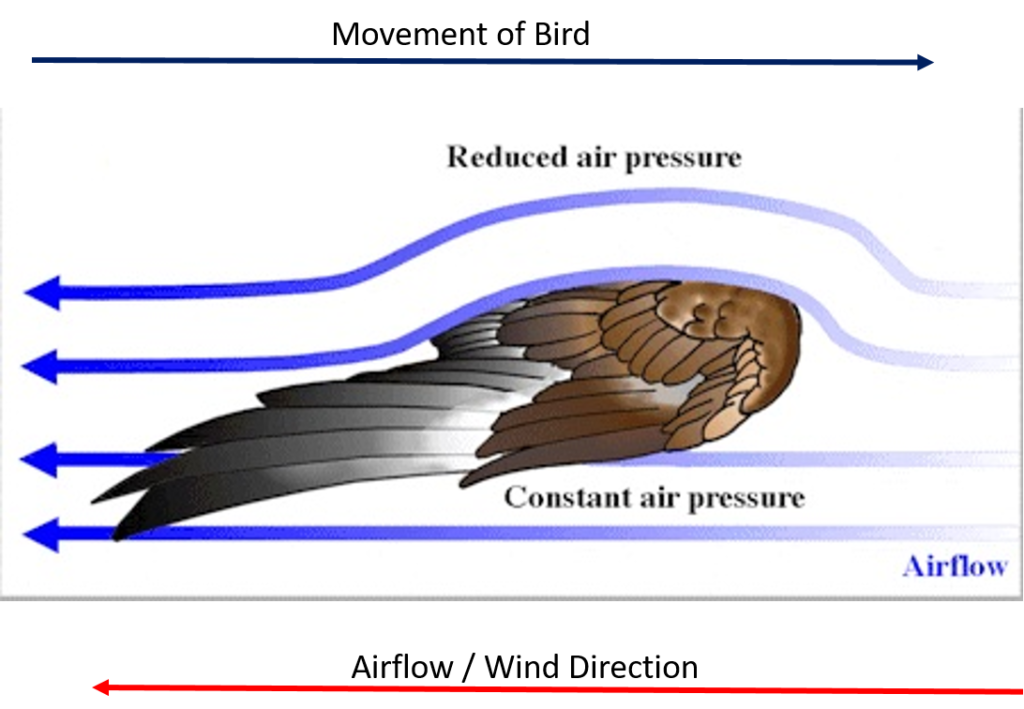 The above phenomenon we have read in school as  Bernoulli’s theorem.. Funny that the Birds don’t know it and still can fly.

In reality it is also seen that the lower surface of the wing has a little concave shape that gets filled with air and acts as an air pocket. In theory this concave shape must cancel whatever force created by convex shape of the upper wing.  But the nature has adapted the trailing side feathers in such a manner that they form a straight line with the decurved leading edge and squares off any effect by allowing air current to flow in straight line

Another way of creating LIFT is to change the angle of wing into the oncoming wind. The wing would be inclined with leading edge higher than the trailing edge. The same laws of physics as above would act on the wing and cause a LIFT. This angle of the wing relative to the wind is called Angle of attack. 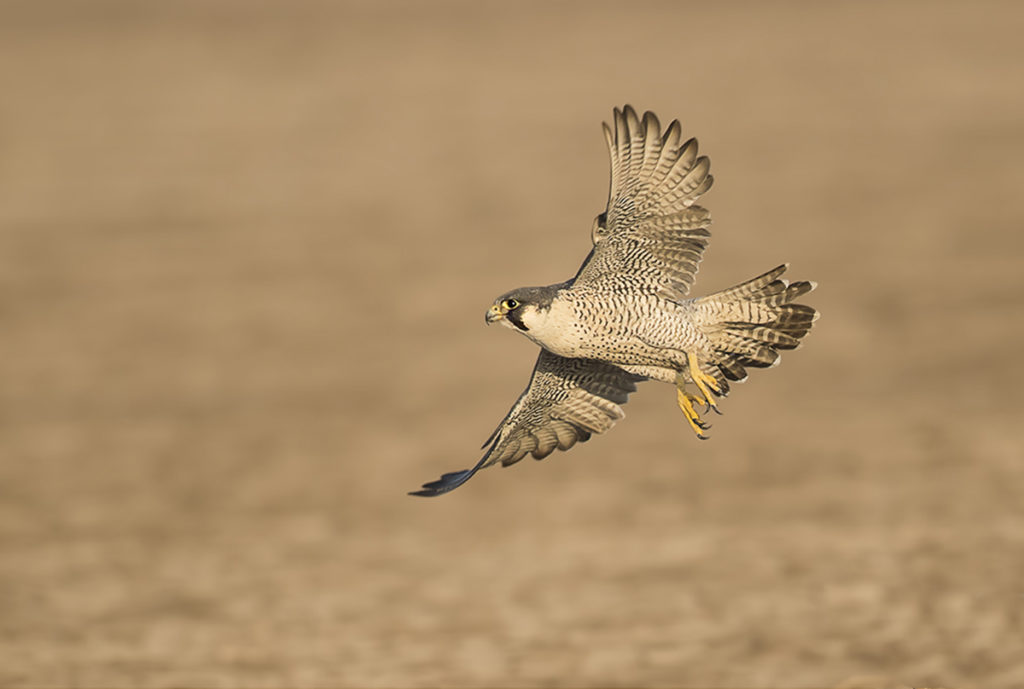 At take offs the LIFT needs to be achieved in as quick and as efficient manner as possible.  Hence most birds will take off into the wind harnessing as much kinetic energy from wind as possible

Once the bird is in the air due to LIFT, the force that keeps it in air and moves it forward is called THRUST.  Thrust is again possible only because of wings that are covered with feathers and the wing shape. The wings have to be flapped at a speed to achieve the forward movement. The flapping cause the air to move above the Aerofoil shaped wings marinating the Lift also.

The Thrust is the force that overcomes the counter force called gravity and cause forward motion with stability. There are different flapping types to achieve this. Each flapping primarily has two strokes:

DOWN STROKE – POWER STROKE:  The major Propulsion power is created by moving the wings down at right angles to the body. This is why it is called POWER stroke. The wing is fully extended, the feathers completely fanned to get maximum surface area and the wing is pushed against the air creating a forward movement. 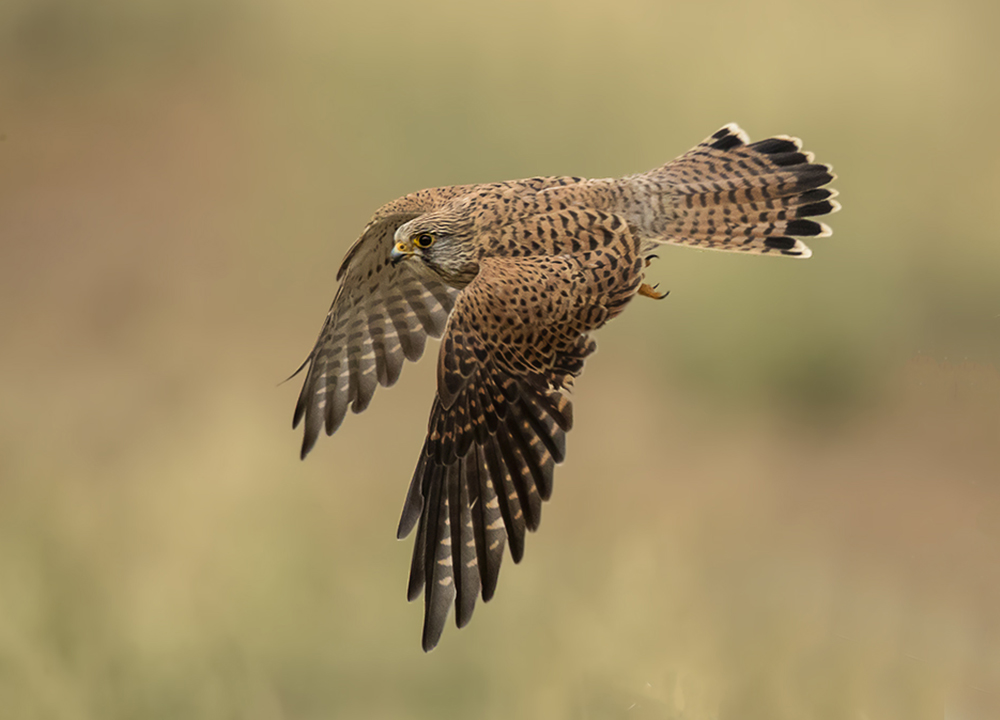 The wing is connected to the body at the leading edge only (to the shoulder), the trailing edge faces a lot of pressure and the feathers are lifted up. This will cause a lot of power loss. To overcome this the Aves have adapted in an incredible fashion. Each Flight feather is partially superimposed by feather on its outside side (towards the trailing edge of the wing). This arrangement ensures that the feather cannot be lifted up by pressure applied from bottom because of the superimposed feather at top.So this pattern reduces the power loss. This creates a cohesive force by which air can be deflected backwards ensuring forward motion. 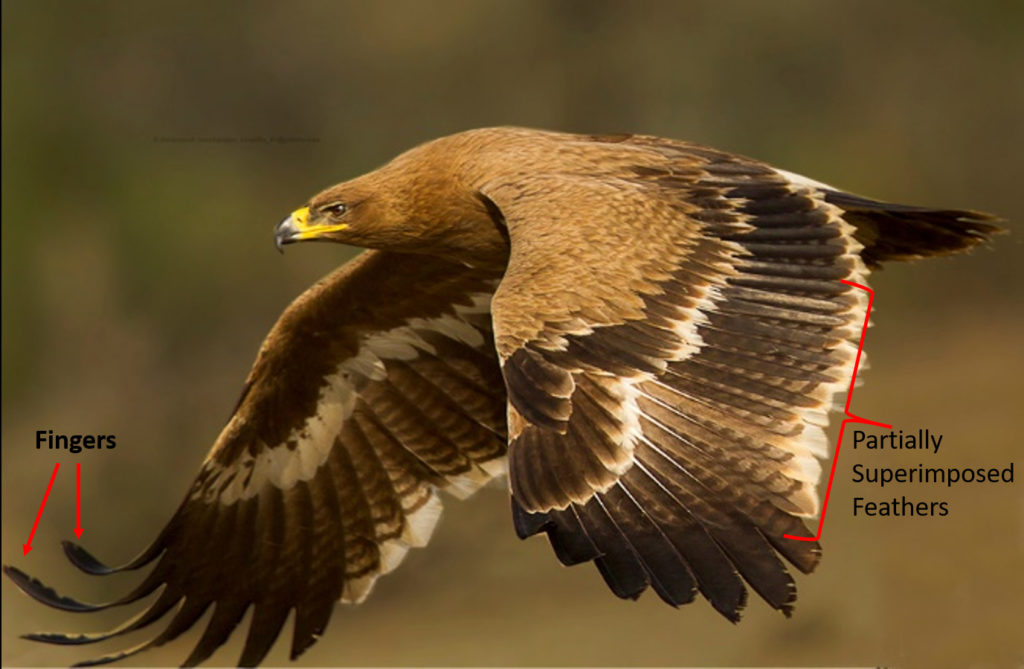 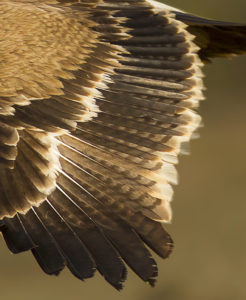 UP STROKE- RECOVERY STROKE: This movement brings back the wings to its original position hence called RECOVERY stroke. As this is a stroke that doesn’t produce any pressure, it is also essential that the DRAG forces do not reduce the power of LIFT and THRUST. For this as opposed to Power Stroke, the least (smallest) possible surface are is exposed to wind. Hence the wings are turned slightly (Increasing angle of Attack) and bent at wrist there by reducing resistance. The resistance is further reduced by arrangement and shape of flight feathers (Remiges).  As discussed above the arrangement of the feathers in form of superimposition from outside to inside of the wing will resist separation when faced with pressure from down but will easily move and separate when pressure comes from top as in RECOVER stroke. 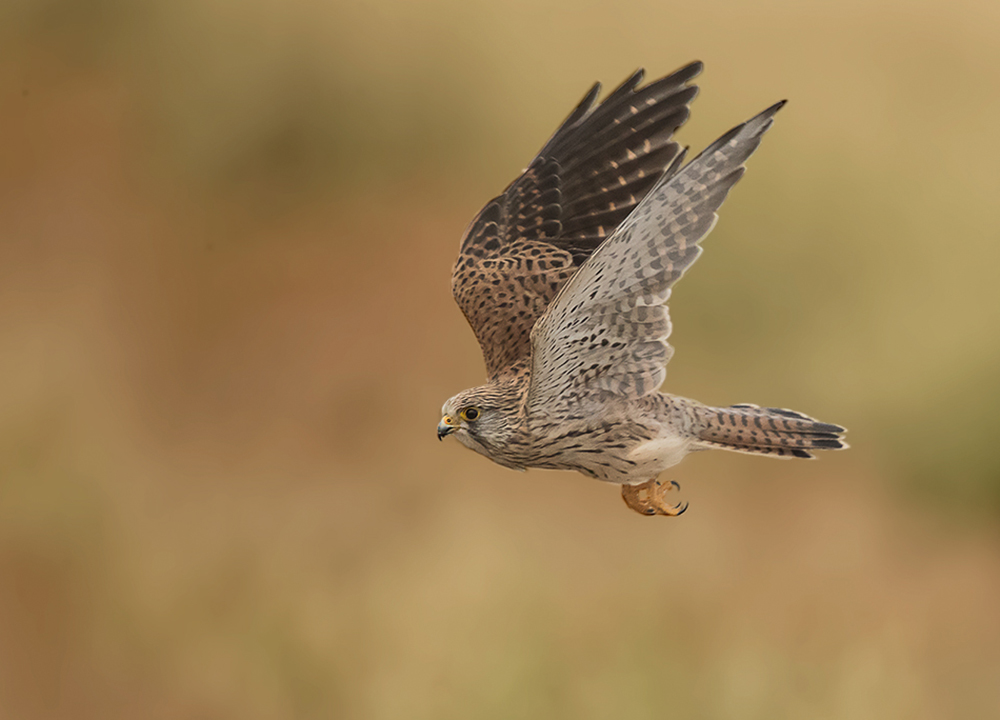 The shape of a flight feather is also asymmetrical along its vane with leading edge have very small surface area, therefore the area expose to wind during RECOVERY stroke is small compare to the POWER stroke

Other types of flights include

Raptors, Sea birds roosting cliffs and High canopy birds will jump/fall from great heights with open wings, the momentum created will be enough to lift the bird without a wing flap. 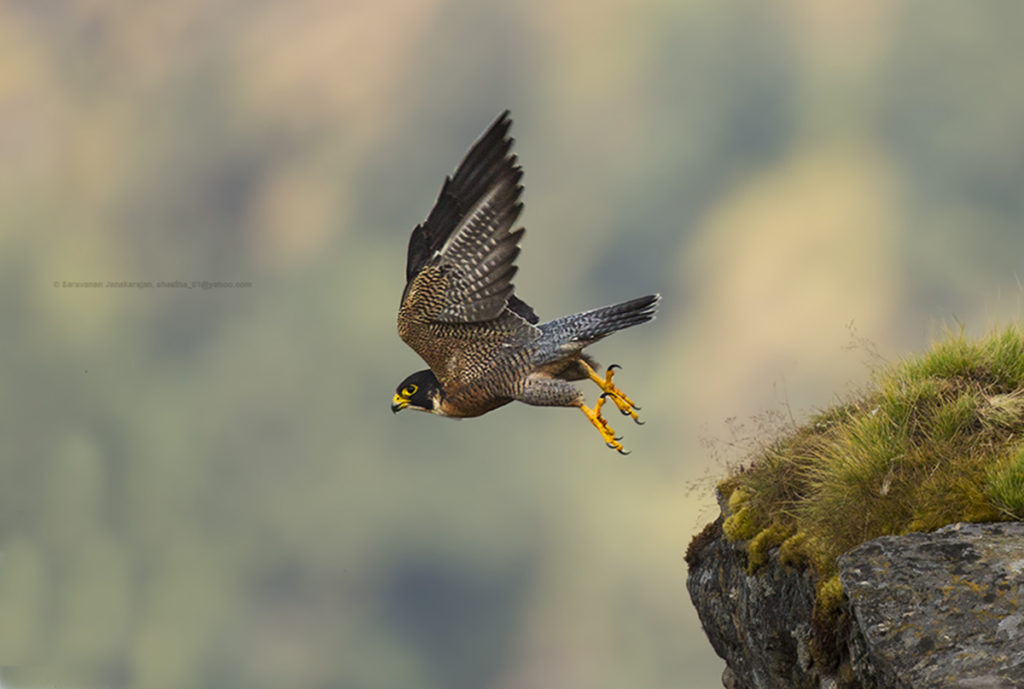 Large birds like Vultures and large eagles need to make a small run to increase the air flow over their wings to achieve a lift off from the ground. 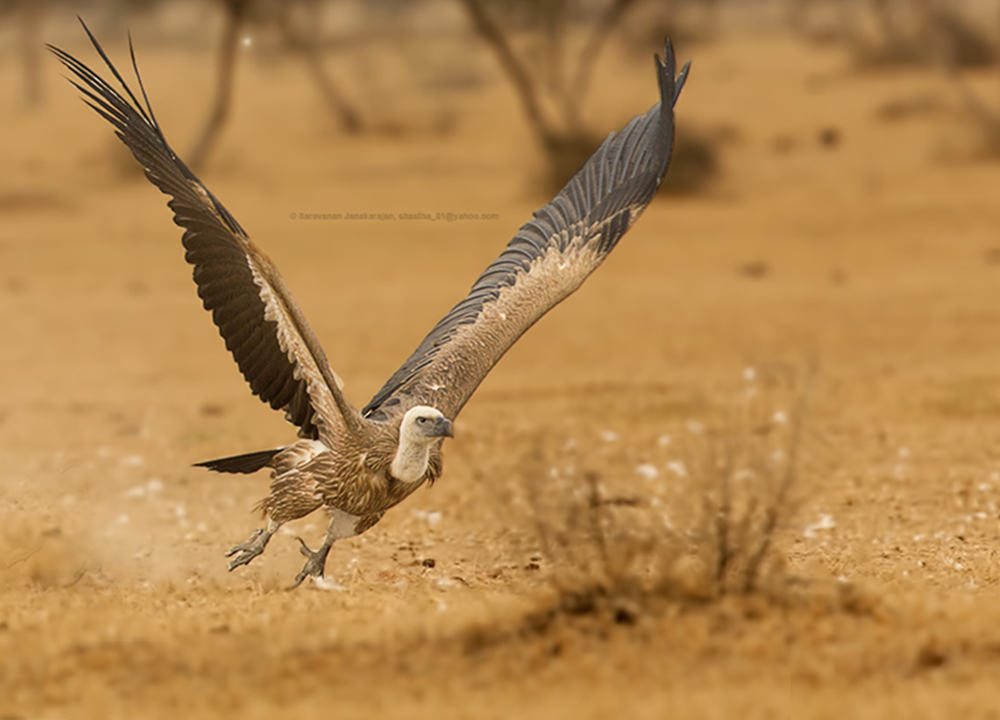 They face unique problem as they cannot achieve a strong down stroke as their wings will crash into water. Due to limited space they have they employ various tactics 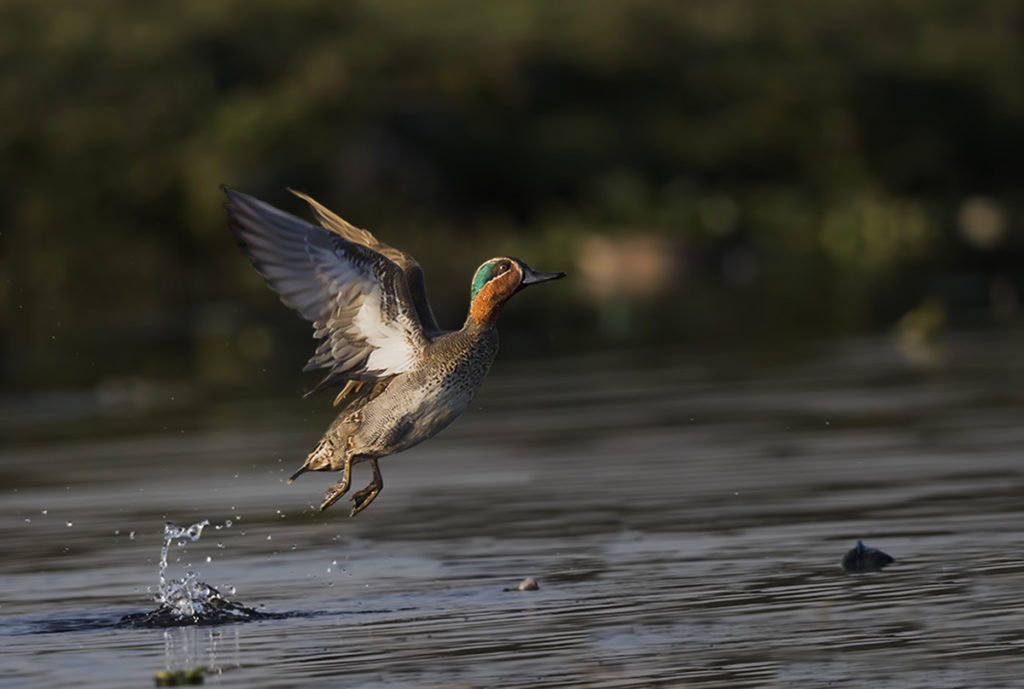 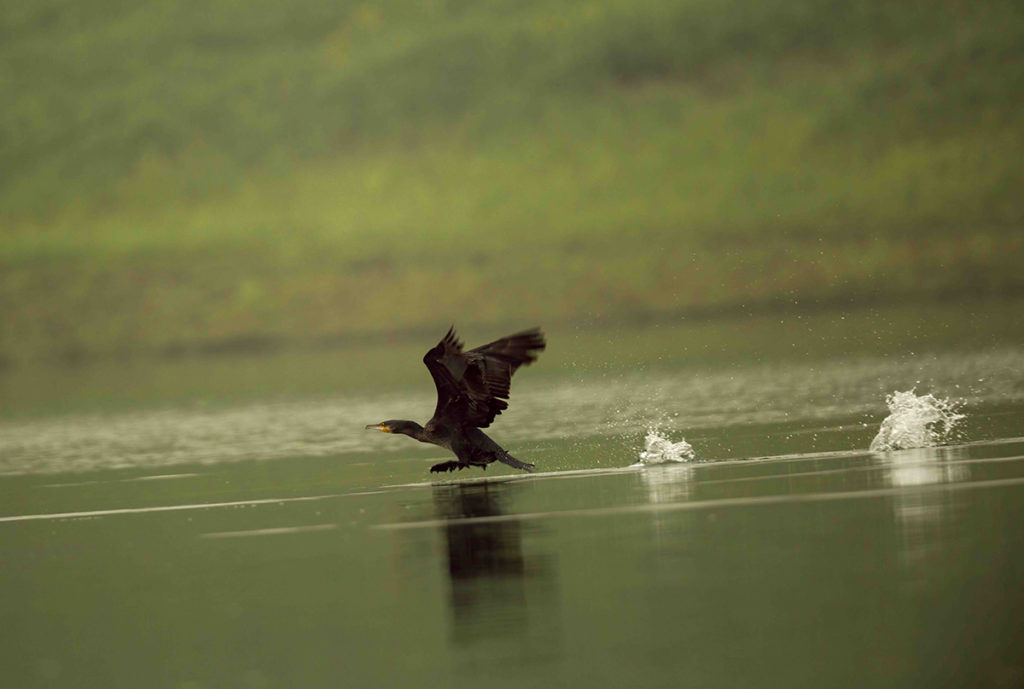 Some birds like Darters have a modified, fused bone structure in the feet and they will crouch down on to any small perch or land and then jump up to a height before flapping of wings

As the velocity of air increases over the wing surface, irrespective of how streamlined it is there will always be a friction that will retard or Hold back the air. This will result in turbulence and cause instability in the bird leading it to crash or fall. There are three types of Friction or DRAG that happens at different parts of the bird. They are

Occurs over the entire wing. It is inherent friction caused by passage of air over the wings irrespective of how streamlined the wings is.

The profile drag is best reduced by addition of another small Aerofoil on the upper surface of the wing. This Aerofoil reduces the turbulence in layer of air on the upper surface of the wing. It also helps increase the LIFT at higher angles of attack. This is required only in certain birds and is present in form of a “BASTARD” wing called ALULA. It comprises of a cluster of feathers (usually four) at the wrist of the wing. It is flexible with limited articulation and can be lifted at will. 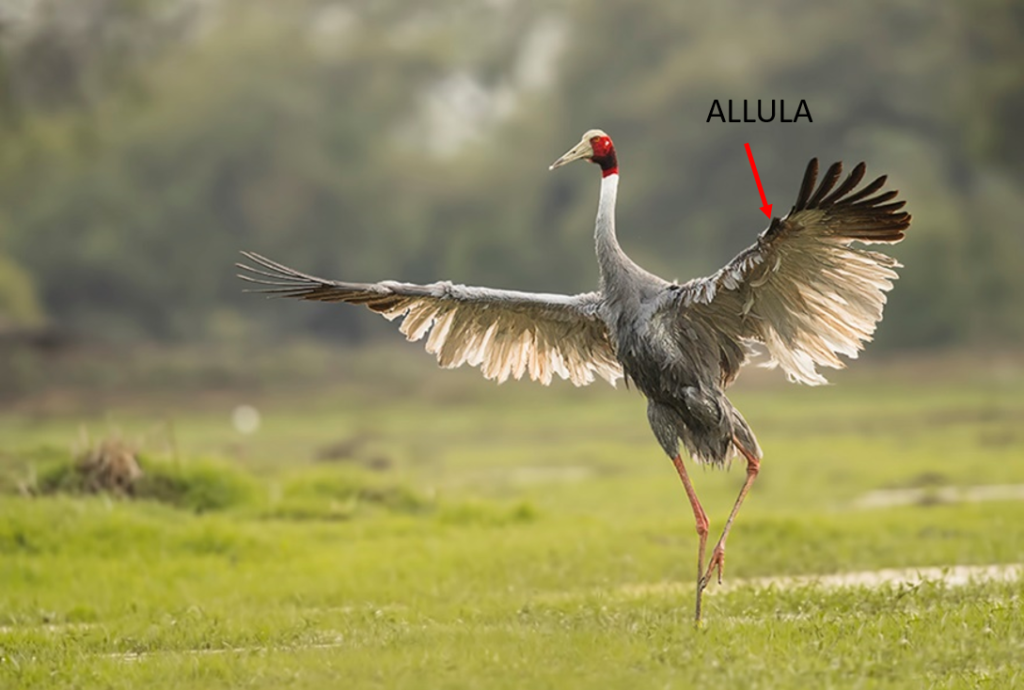 This occurs at the Wing tips only.  It is caused by different speeds of air on upper and lower surface of the wing. The result is different pressures on each surface trying to equalise each other. Since the wing is being constantly flapped and is in forward motion through the air, this creates constant displacement of air and continued pressure differentials, this makes the trailing edge unsuitable for the equalization of pressure.  The only place left for equalization is the WING tips. The air current hence flows the length of the wing creating turbulence and shakes in form of minor vortices as they meet at the tip. This instability retards the wings and makes it less effective Aerofoil. Larger the wing surface, higher the pressure differential and higher the instability and hence the effective drag. As this drag is induced by equalization of wing pressure it is called INDUCED Drag.

As the problem surfaces, my avian friends quickly adapt and find a solution. The Induced drag is reduced by the wing tips of Primary Feathers having large gaps, thereby giving a “FINGER” like appearance.   As each Flight Feather is an Aerofoil in itself and they too have an asymmetrical shape around the central vane giving them a downward curved shape, the Pressure differential meet at the tip and get resolved

The fingers can be clearly seen in large birds like Eagles. 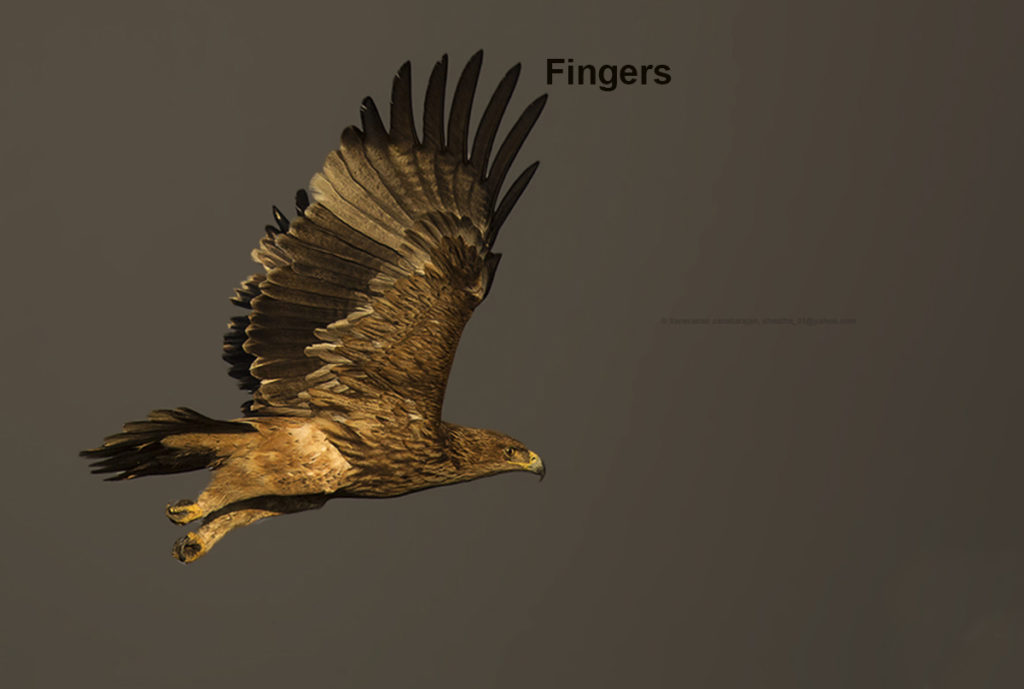 Occurs all over the body. It is so called as it has a negative effect on performance of the wings.

So for a bird to fly the simple equation is 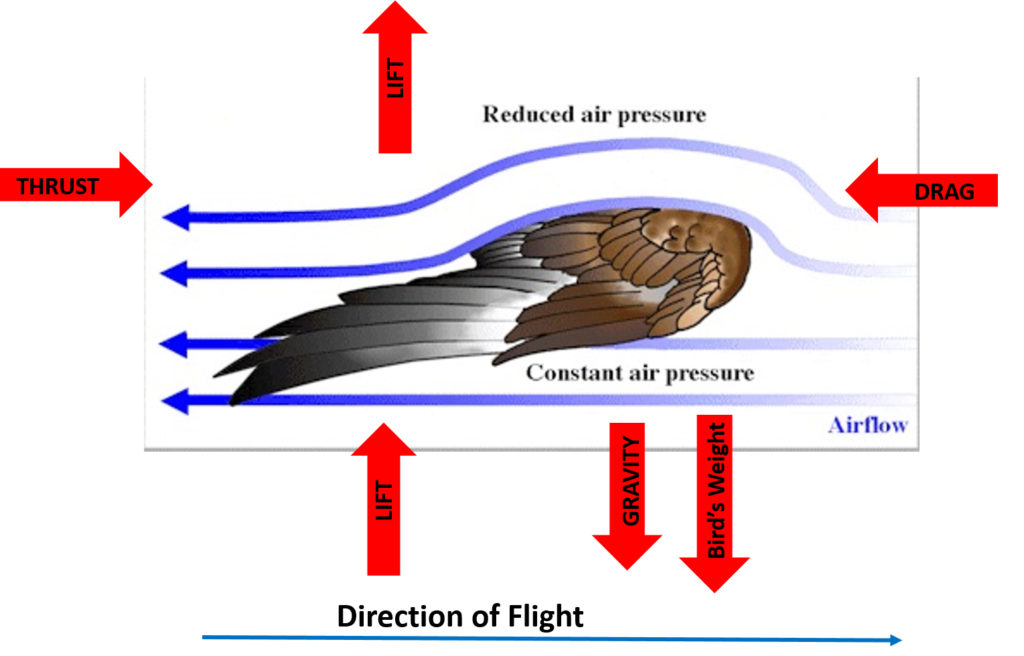 A flying bird needs to come down also.  This happens in many ways.

Many birds prefer Landing into the wind. They open their wings, Fan their tails and in cases of water birds they lift their webbed feet all that can increase their “Surface Area” and cause them to decent 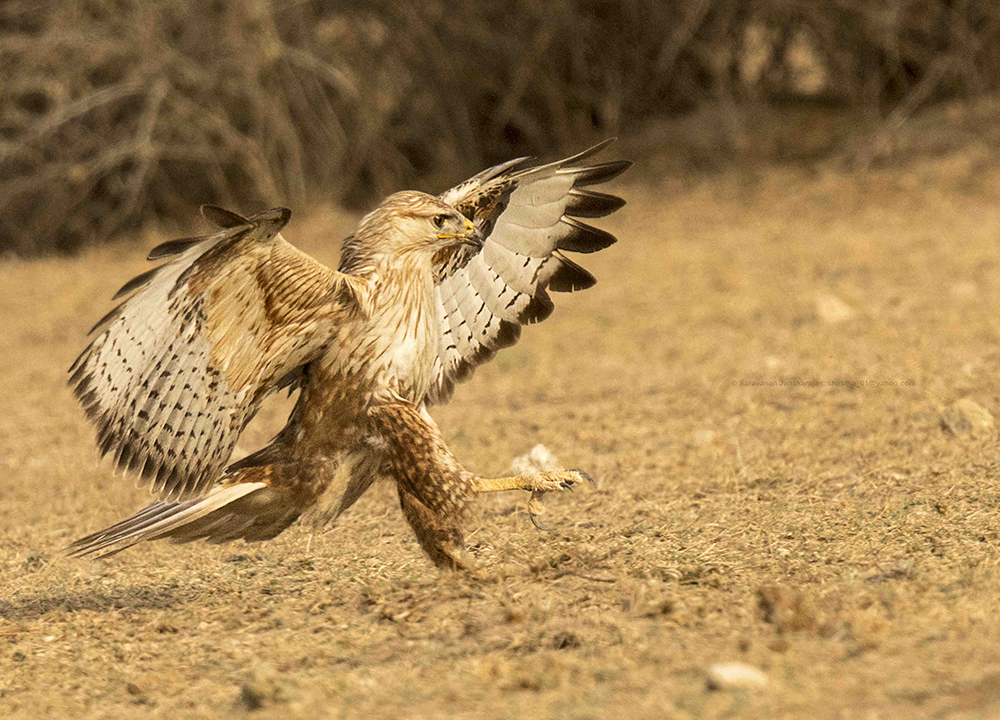 Birds with Long wings like Eagles will land with a RECOVERY Stroke, thereby the absence of a POWER stroke will not provide them with lift and thrust. The ALLULA may also be use as it operates as a brake reducing turbulence and providing stability. 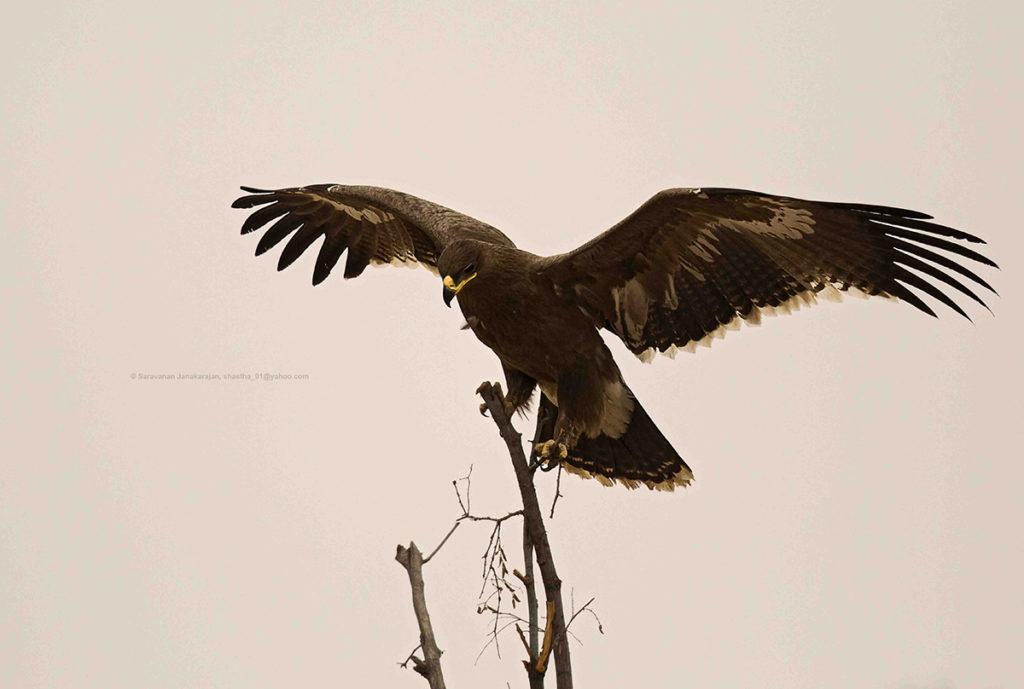 The Birds with Narrow wings land very quickly as their wings are narrow and are useless as brakes and they have no ALLULA. They use the headwinds for breaking and drop into their nests or into holes of a tree like Swallows, Swifts and Martins 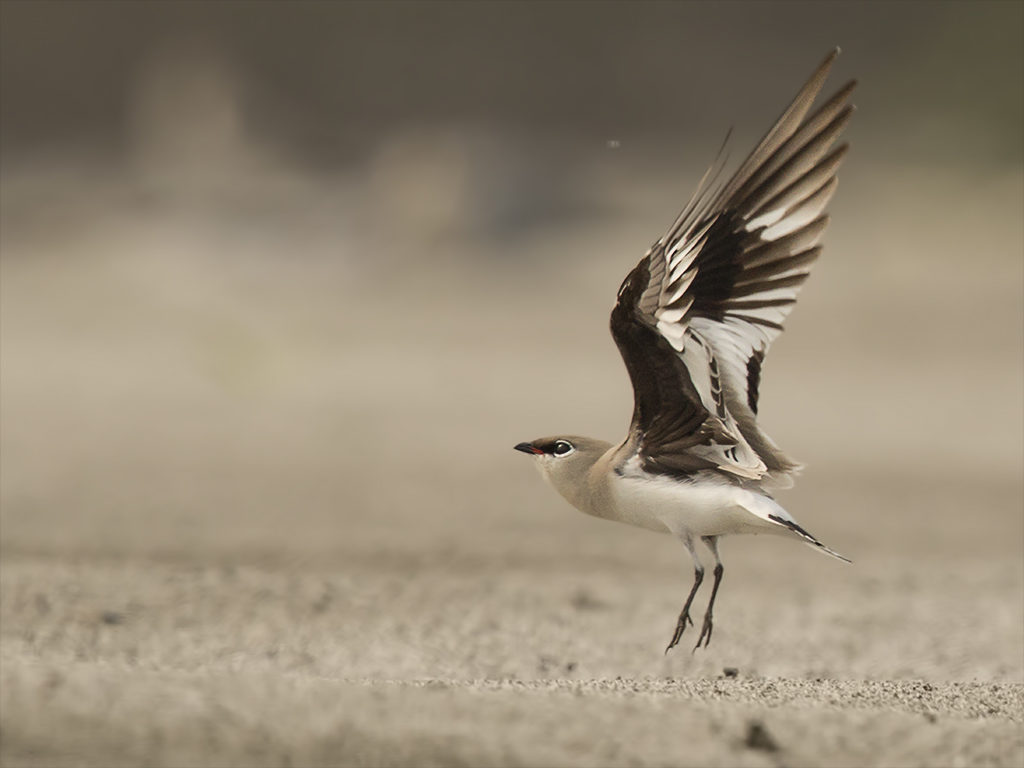 Water birds have large surfaces to land hence they will use their Wings and tails fanned and use their webbed feet as Water Skis to land on water.  Some of them Like Cormorants and Grebes will land on their bellies or breasts. 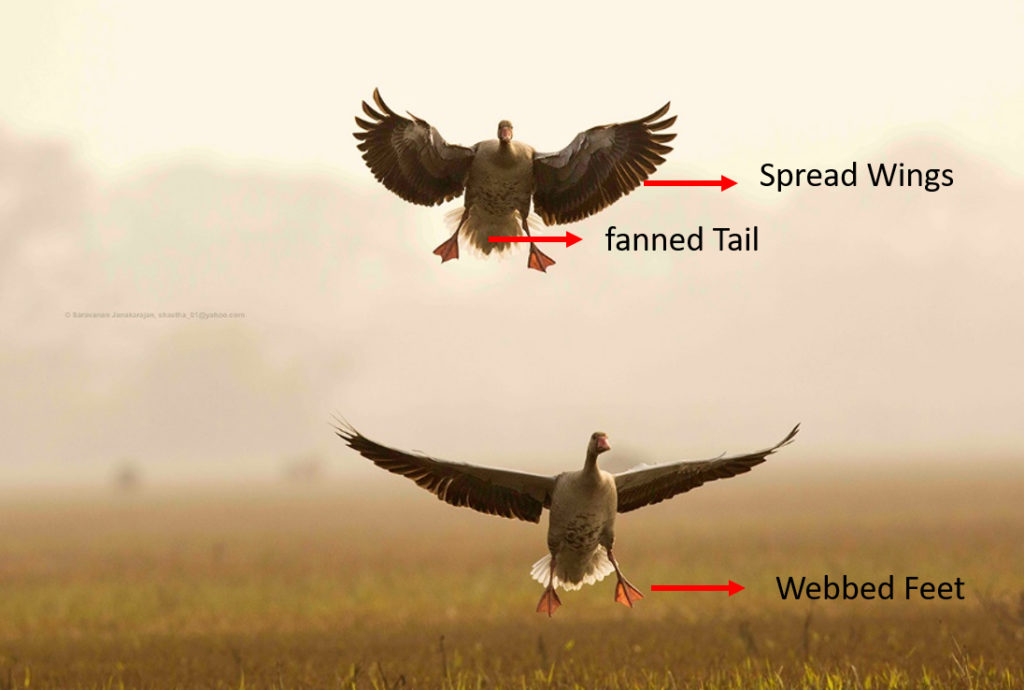 Thus the birds have used laws of physics and adapted their bodies to achieve a super power that the Mammals have always aspired for :: ABILITY TO FLY