Thermoregulation to keep the body warm:

During winters the birds have to eat more to keep body warm as food produces energy in form of heat. But food is scarce in winter as the plants dry up and insects and other prey are well hidden. So to conserve energy and too increase the body temperature birds do the following

The easiest way to warm the body is to expose it to sun. The birds will come out in the open and spread their wings and expose as much surface area as possible to gather heat. Some birds like doves while lying flat on the ground will lean towards one side and raise the other wing vertically to warm the underside of the wing also. Birds of prey and some Swimmers like Darter and Cormorants will warm themselves by perching on trees with exposed perches and spread their wings and arch the trailing ends forward to maximise the exposure to sun. They will do this by repeatedly turning themselves towards and away from the sun 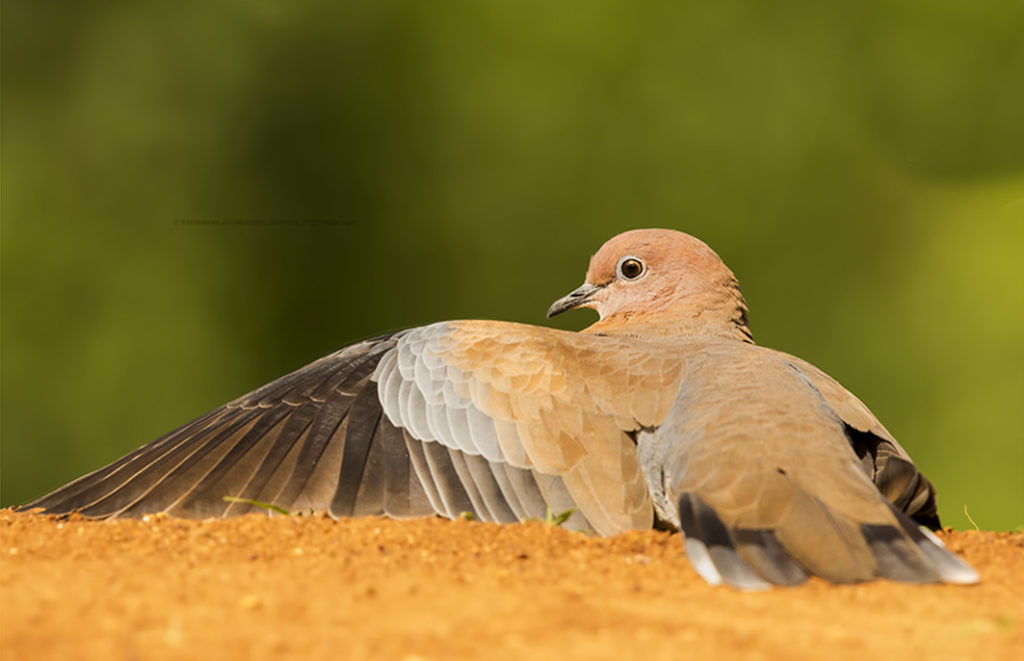 During nights instead of roosting in open if the bird roosts inside a tree hole, manmade structure , under the cliff ledge, cave or even in a nest made of leaves, it will save a lot of energy as against trying to keep itself warm in open . The ambient temperature in a shelter will be 5-10oC higher than the open skies. 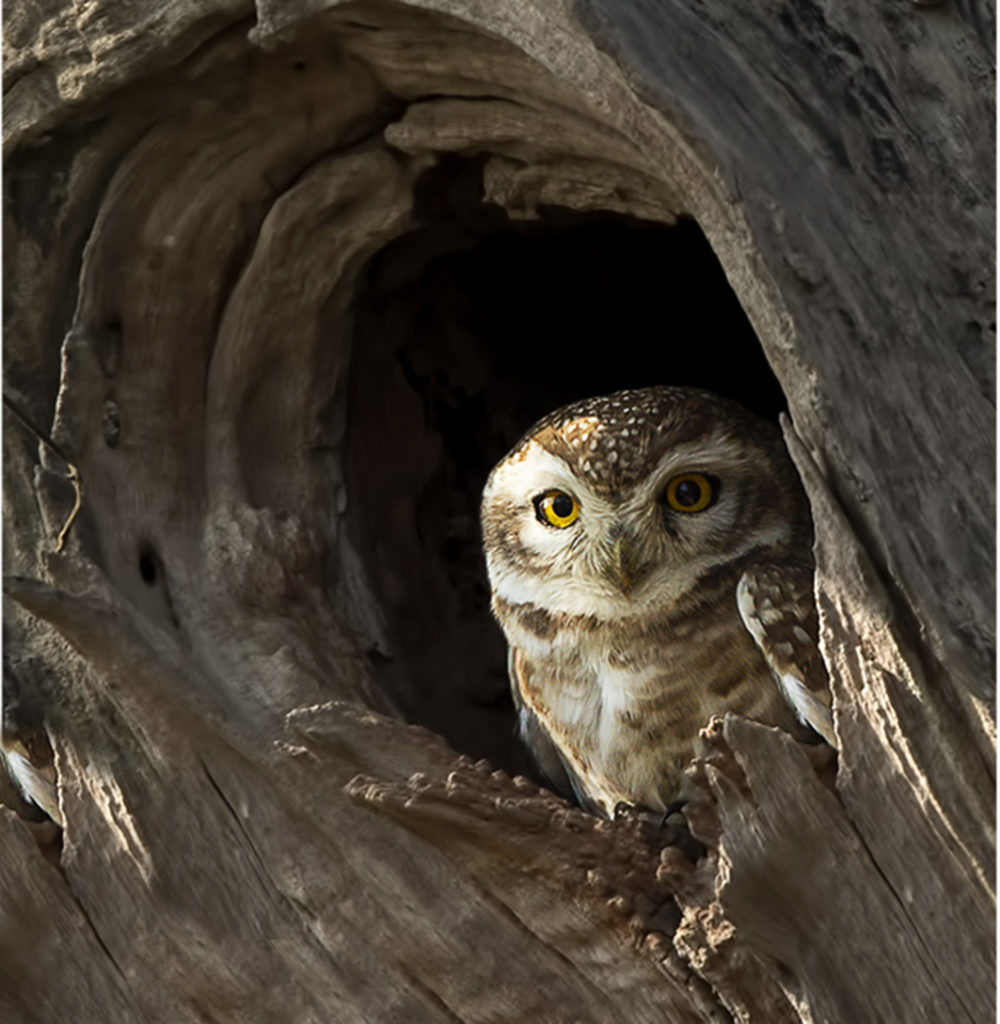 Huddling or clumping is a behaviour where the birds sit next to each other, touching each other and sharing the warmth of their collective presence. This can be seen in co-operative breeders where there might be a single species (Penguins) or multiple species (Herons, Storks). Huddling helps them by buffering them from cold wind and ambient temperature. This also detracts any predator from approaching the colony as there are too many of them.

The legs of a bird are not covered with any insulator feathers hence the birds loose heat from the legs very fast. So they will prevent this by pulling their legs inside right up to their belly, vent and tail feathers while flying. While perching they will perch in a hunched position by tucking in their feet and not exposing them at all. Sometimes they will stand on one feet and tuck the other one in to minimise the exposure 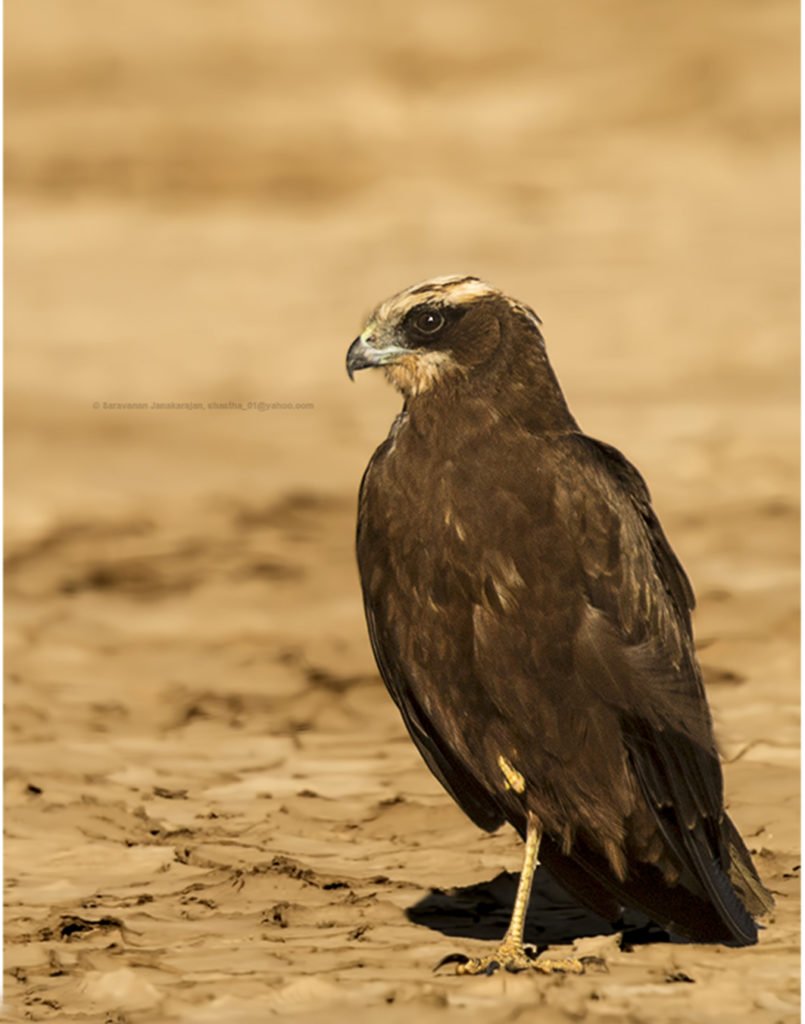 This is an opportunistic behaviour observed esp. in the Nocturnal birds like Nightjars. They will rest on warn substrates like roads, warm rocks, near chimney of a house etc. This they do when they take a break from forging for food. Some storks sit on their “tibio-tarsal” joints to bring the body as close to the warm ground as possible. 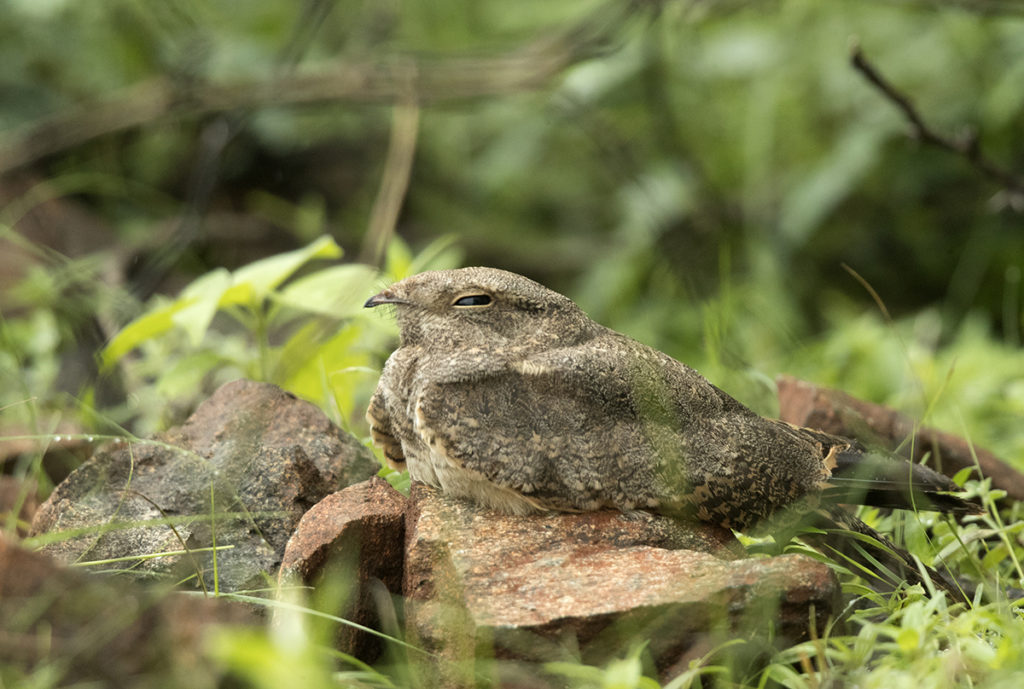 By erecting the contour feathers, the birds will catch a layer of insulatory air and trap it in the plumage. This can be done only when they are roosting because when they are flying all air trapped is removed from plumage and it has to be a sleek structure. 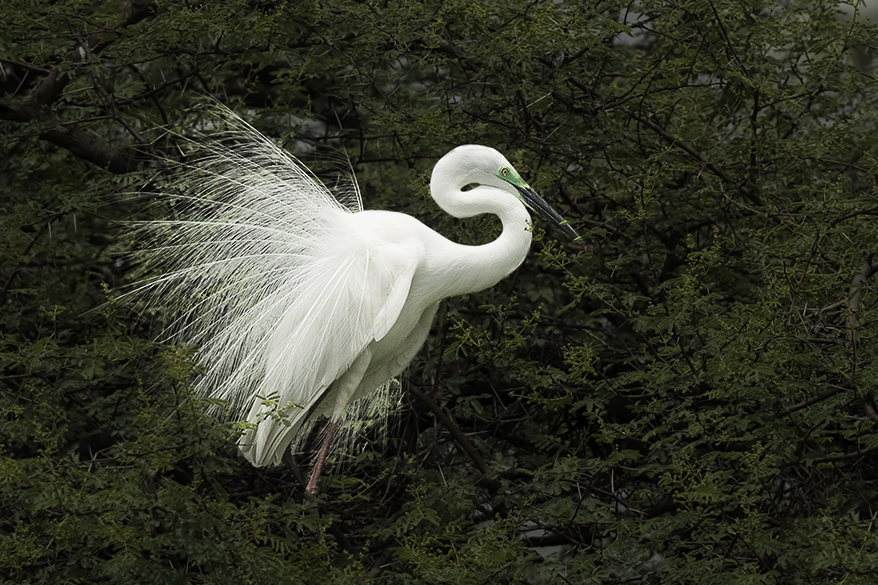 If the bird is unable to follow any above given method, then the core temperature drops. Once it reaches a level called Lower Critical Temperature (LCT), the internal mechanism of heat production takes over. LCT is when the brain recognises that the temperature has to increase to avoid any damage to internal organs. At this point the body produces heat by increasing their metabolic rate. Birds can triple their basic metabolic rate . But the disadvantage is that they have to eat to maintain this metabolic rate, and in Winter the food is scarce. If it is not able to do so then the bird will start shivering and the temperature will fall to Lower Lethal Temperature (LLT). At LLT the metabolism fails to produce any more heat, hypothermia sets in and the bird dies.

LCT and LLT are not any fixed numbers common for all birds . They differ basis their body size. Smaller birds have faster rate of reaching LCT as their surface are to volume ration is also high. The larger birds are able to regulate the temperature better as their ratio of surface area to volume is lower. Smaller birds have a range of 30-35 oC while the large birds have an LCT range as low as 5-10oC. That is why birds found in Colder places and high altitude are larger than those found at the sea level and in deserts. This Size –Climate rule is also called as “Bergmann’s Rule”. Even in the similar sized birds the birds at tropical climate will have lesser feathers and thinner plumage than similar sized birds at higher altitude. Hence they will reach LCT and LLT at a faster rate than the ones at higher altitudes.

Thermoregulation to keep the body cool:

When the temperature is very high the birds need to cool down to maintain their body temperature. Simplest way is to drink water and cool themselves through evaporation . there are other methods also used

Drinking Water is an effective method of cooling  but as the birds don’t sweat they use water in other ways also. They wet their feathers and allow the water to evaporate thereby their body cools down. They stand in water with both feet in them so that the cooling of their feet and body happens. Small birds are aware of predation during this time so instead of sitting in water they repeatedly dive / “ Plunge” into water and cool themselves. So when we see Kingfishers, Bee-eaters etc. plunge into water it is not always for food, it is also to cool themselves. Some small birds will have a “foliage bath” i.e. the water /dew trapped in thick leaves or flowers is used by them to cool down their bodies. Man-made garden sprinklers are god sent gifts to the passerines like Sparrows and Myna. Small bird baths and stagnated water can also become a gift for the small birds. 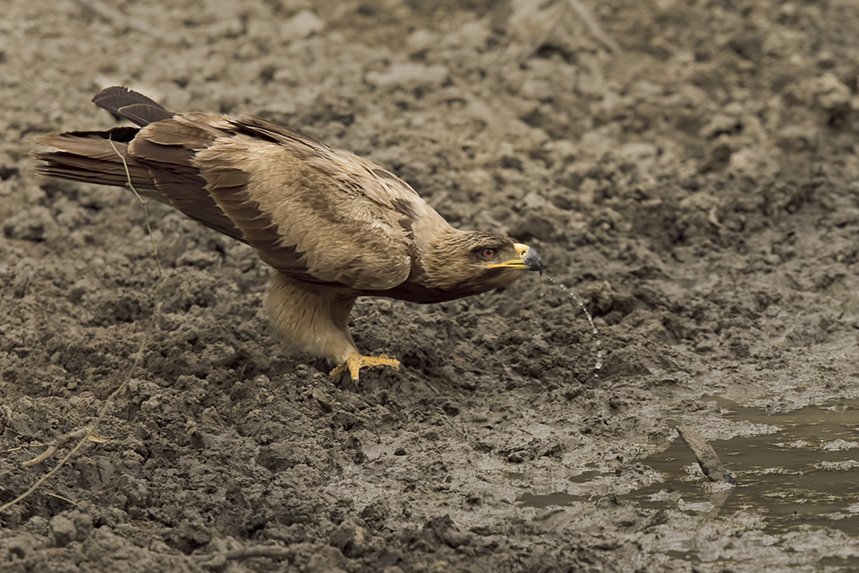 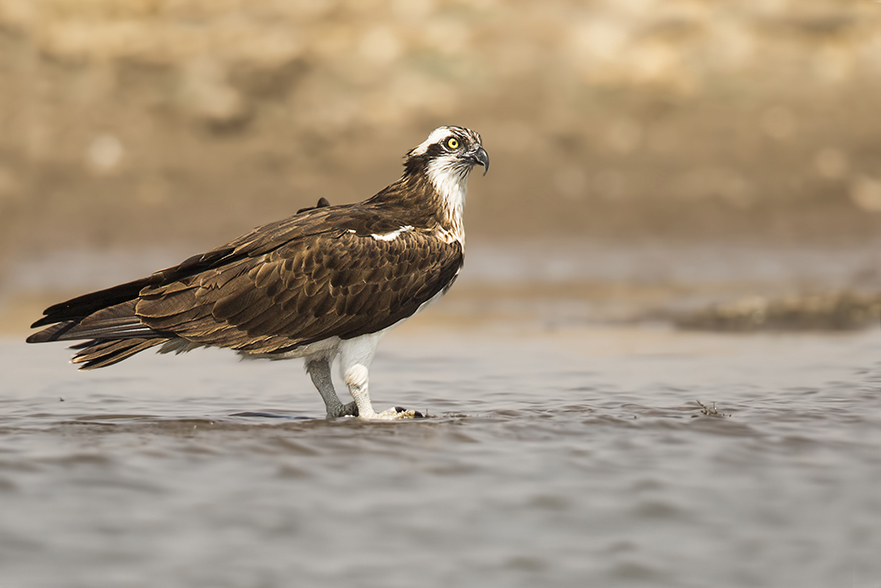 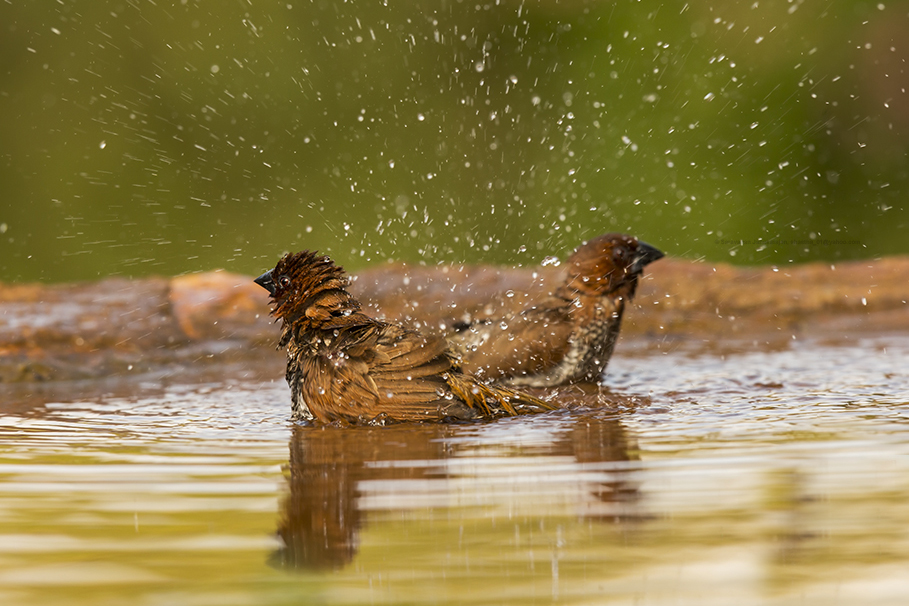 Many birds like Storks and cranes will defecate on their legs. This is called Urohydrosis. This will not only keep the exposed legs cool , but also on drying it will become white and reflect the solar radiation away. 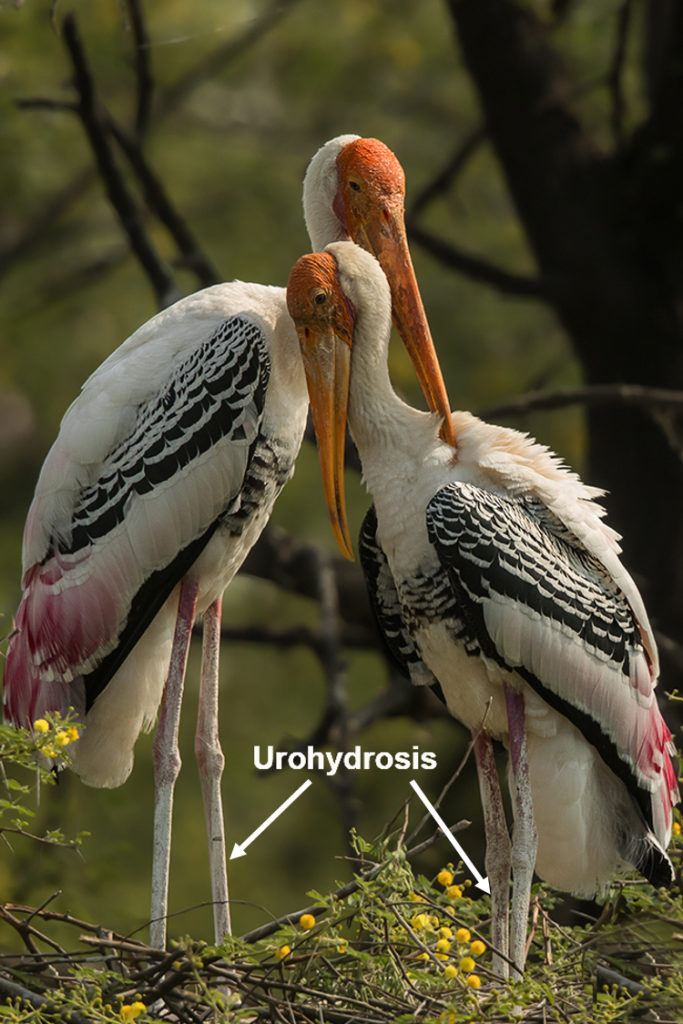 By fluffing the feathers, the birds will catch a layer of insulatory air and trap it in the plumage. This cool air will then transfer the heat from the body to atmosphere. This can be done only when they are roosting because when they are flying all air trapped is removed from plumage and it has to be a sleek structure. Some birds that live in hot and dry areas have a camouflaged and heat reflecting light coloured  plumages.

As in converse to  the need to gain temperature, the birds will reduce the surface area that come in contact with the heat reflected from ground. This is done by standing erect and tall with straight legs. This can be seen in passerines like Pipits and Larks. By increasing their height by 1 cm they can reduce the temperature by 1oC. 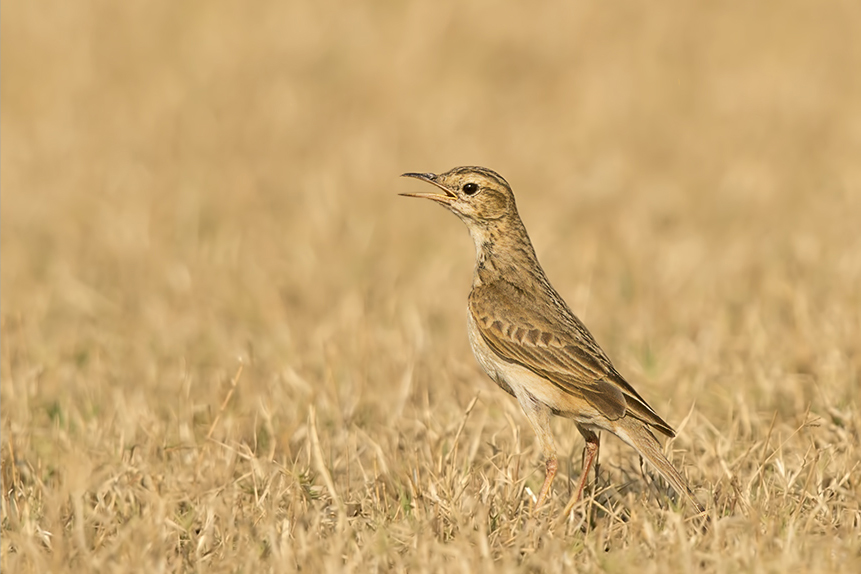 Many birds do not live near water , so to cool their eggs or hatched chicks or their incubating partners they will wet their belly feathers and carry the water to their nest , they will then bring this wet feathers in contact with the egg/chick or partner to cool them. This can be seen in Sandgrouse. Their belly feathers also have been adapted to have a hollow vein and this sucks in water like a straw. 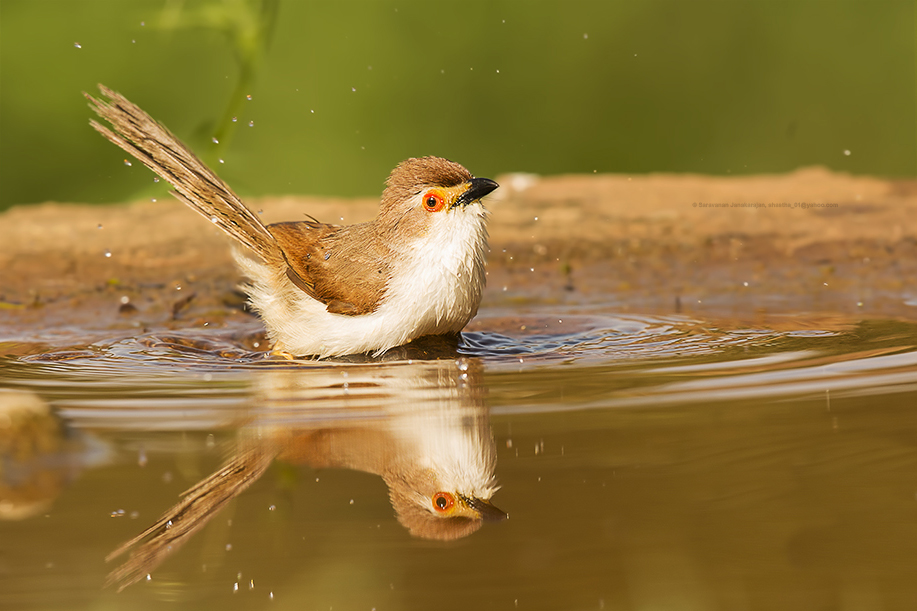 They relax their wings and pull their wrist away from the body to expose the underparts to cool air. This is done especially after plunges and wetting themselves.

The birds will restrict their activity to dawn and dusk time to avoid the harsh sunlight during the day. They rest in shade to avoid the sunlight and exertion and cool themselves down

The respiration in birds is different from that of a mammal. The birds along with lungs have 9 air sacs. Unlike the Mammal respiratory cycle which is bi-directional, where in the cool oxygen rich air getting mixed with the spend hot air, the birds have a unidirectional breathing pattern. So here two respiratory cycles are required to send the air in and out of the body. These air sacs hold the spent hot air in them and prevents it from mixing with the incoming cool air .The advantage here is that the Cool air doesn’t mix with warm air .

Like for increasing body temperature, the birds also have a physiological mechanism for cooling down. Once the body temperature reached Upper Critical Limit (UCT), the bird opens its beak and mouth to allow more air to enter the body, This is externally visible as Gular fluttering , the movement of throat skin. The air moves over the wet mouth and tongue with resultant evaporation cooling the blood. But this has a disadvantage that there is a loss of water in this process of evaporation. This water loss can be made up either by drinking more water or through metabolic process. As the protein, carbohydrates and fats get oxidised their by-product is water. If the cooling doesn’t happen quickly then the body reaches Upper Lethal temperature (ULT) and the bird then dies of Hyperthermia 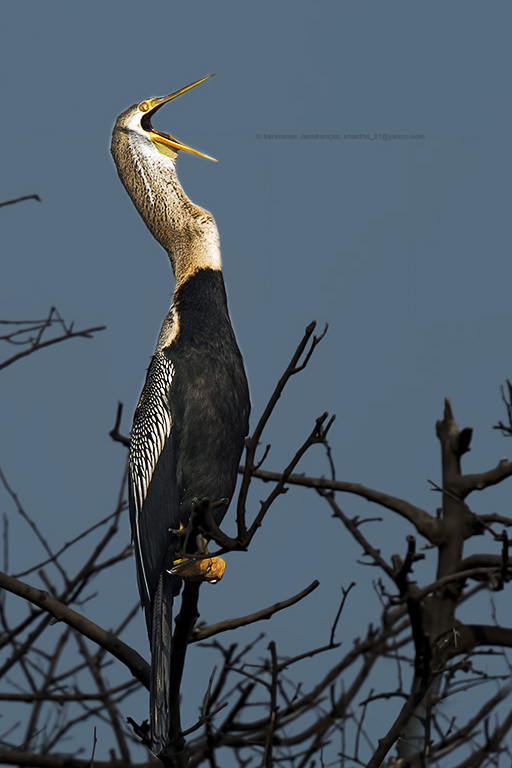 So to both cool and warm themselves the birds have adapted themselves through both physiological and behavioural adaptations.

To warm themselves in winter: