Wings of a bird is like arms of a human being. The structure of the wing resembles that of the Human Arm.

The  parts are Scapula, Humerus, Radius and Ulna, Carpus and Metacarpus, and the Phalanges. 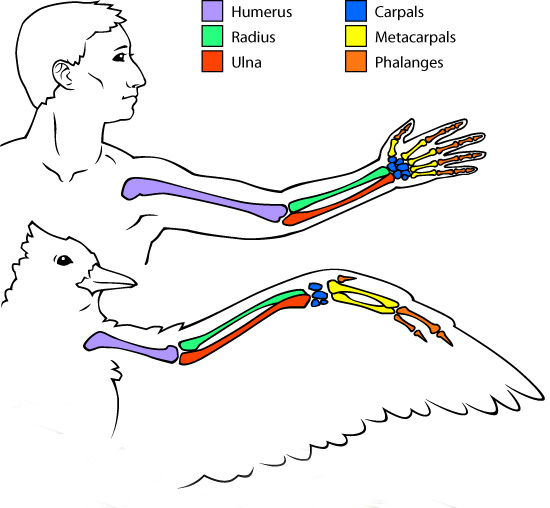 These parts can be grouped as

Elbow : The humerus joins the radius and ulna (forearm) to form the elbow. 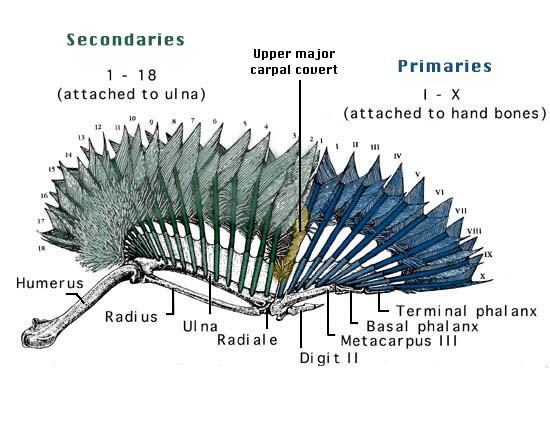 The bird’s body is covered by Feathers. There are three kinds of feathers

Remiges & Coverts : They cover the wings

Retrices  : they are the feathers in the tail

Down feathers. : To regulate the body heat and protect the body

(For a exploring further details on feathers pls refer http://ogaclicks.com/wordpress/feathers-usp-of-birds/)

The feathers on the wing can be classified as Remiges & Coverts

The remiges are the flight feathers and consist of

These feathers make up a large portion of the shape of the wing, so much so that the length and shapes of the primaries and secondaries are used as field marks to identify different species of birds . 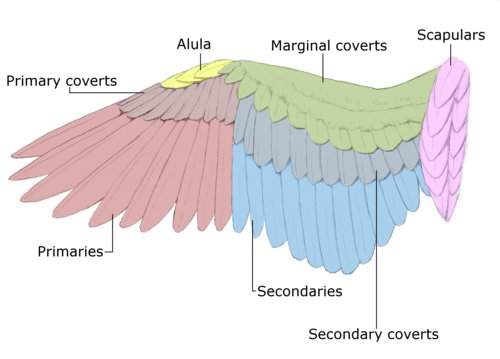 Primary Feathers: The Primary Feathers are the “fingertip” feathers of the wing and are found at the wingtip. Primaries are connected to the Manus (the bird’s “hand”); these are the longest and narrowest of the remiges and they can be individually rotated. These feathers are especially important for flapping flight .The outermost primaries—those connected to the phalanges—are sometimes known as pinions

Species vary somewhat in the number of primaries they possess.

Secondary Feathers: Secondary Feathers make up the back edge of the wing closer to the body. They are generally shorter and closer together than primaries, and birds do not manipulate them as much as they do their primary feathers. Secondaries are connected to the Ulna. In some species, the ligaments that bind these remiges to the bone connect to small, rounded projections, known as Quill knob, on the ulna; in other species, no such knobs exist. Secondary feathers remain close together in flight (they cannot be individually separated like the primaries can) and help to provide lift by creating the air foil shape of the bird’s wing. Secondaries tend to be shorter and broader than primaries, with blunter ends .

They vary in number from 6 in Hummingbird to as many as 40 in some species of   Albatross. In general, larger and longer-winged species have a larger number of secondaries

Many Birds are missing the fifth secondary feather on each wing, a state known as diastataxis

Tertiary Feathers :Tertiaries arise in the brachial region and are not considered true remiges as they are not supported by attachment to the corresponding bone, in this case the humerus. These elongated “true” tertiaries act as a protective cover for all or part of the folded primaries and secondaries, and do not qualify as flight feathers as such. The term humeral is sometimes used for birds such as the albatrosses and pelicans that have a long humerus. 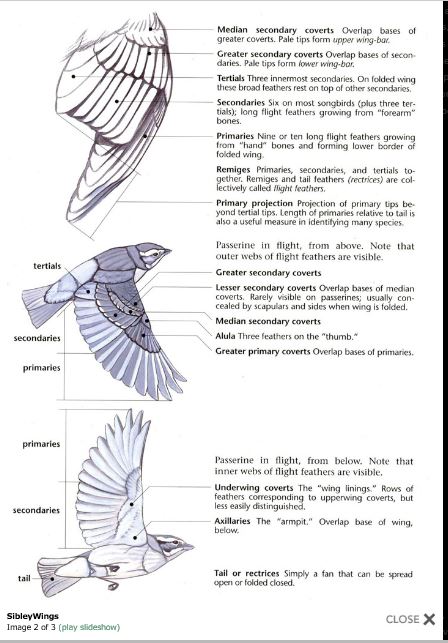