Woodpeckers are one of the most colourful of all bird species. About 37 different species of woodpecker can be found in Indian Subcontinent. Some are ground dwelling while majority  live on trees. They have strong beaks to peck on the tree surface and a very sturdy tail. 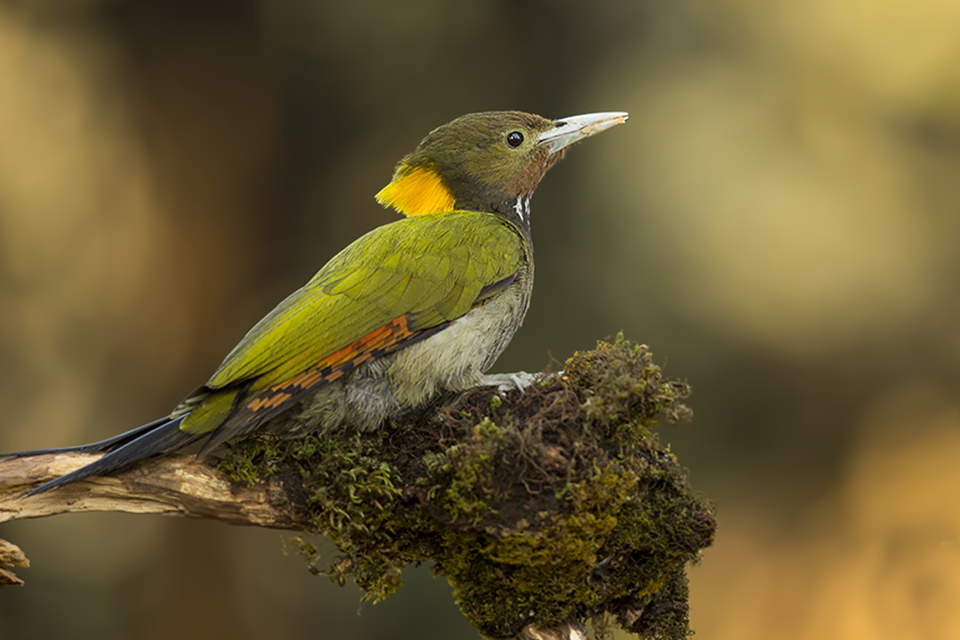 The wood peckers peck the tree for

Woodpeckers are mainly insectivorous . They eat Ants, Small invertebrates, Larvae , Termite and some times the eggs of these insects. In order not to compete with other birds who have same insect targets, the woodpeckers peck the tree barks so that they can reach these prey. 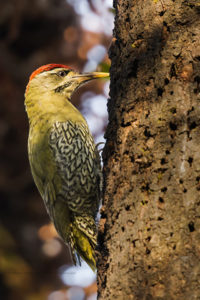 The woodpecker have very good hearing sense. They can be seen with ears pressed on to the bark to hear the larvae /insect movements. Then they target the area by alternate pecking done at an angle  and from opposite sides to create a chiselling action. This pecking causes the prey to come out or move to a place where the woodpecker can easily reach it. Once the prey is seen the woodpecker unleashes a  secret weapon, its long barbed sticky tongue. The tongue is very long reaching 15 cm in some species. It is coiled within the head , one end attached to the base of the  mandible and the other end is ready to spring out of the beak. The tongue is controlled by a  muscular tissue which shoots it out on locating a prey. The barbs at the end of tongue are used to hook the and extract the prey from the tunnel picked by the woodpecker. The tongue also helps reach the small cracks in the bark and dig out the small ants and eggs.

All the tree dwelling woodpeckers excavate their own homes. The hole is dug usually in a dead tree ( easier to excavate) or sometimes in a live tree also. Both the sexes take part in nest construction that can take from 2 to 6 weeks depending on the species . 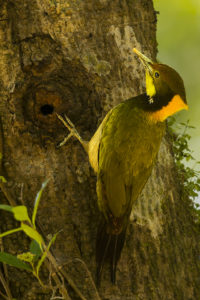 The Nest is lines with wood chips from the excavation to provide a soft interiors. The height from ground level where the nest is built  varies according to species , it is usually at least a Meter from the ground. The nest can be constructed on straight trunk or Sloping branches that are sturdy. The  position of choice is the underside of slanting branches . This gives protection to the nest from Rain waters  and  makes it difficult for predators to reach. These holes can be reused or a new one built on the same tree ( preferably same branch) basis last years experience.

The  pecking done by the Woodpeckers in order to communicate their presence in the area is called “Drumming”. Not all woodpeckers do this but the species that do this have their own rhythm and frequencies. Hollow limbs are ideal for this drumming and the advantage is that it can cover bigger area. But to communicate with mates they use the calls as it has a personalised effect unlike drumming

So how does the Woodpecker accomplish all this that other birds are not able to do. The woodpecker has some of the most astonishing adaptations in Animal kingdom to help do all these tasks

Toes :   They have a feet structure termed as ZYGO-DACTY-LOUS . They have two toes facing front and two facing back. This helps them hold on to the branches  or the bark of the tree 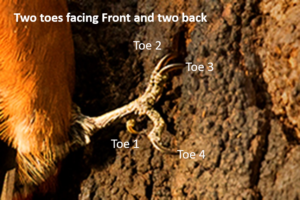 and gives the required balance to remain upright. But the beauty in adaptation is that the two toes facing back can be moved around and made to face front. Hence four front facing toes.  So it is up to the bird in which direction its toes can face…

Tail : The tail of wood pecker is very sturdy and prop like. The tail feathers ( Retrices) are reinforced with tapering shafts. . 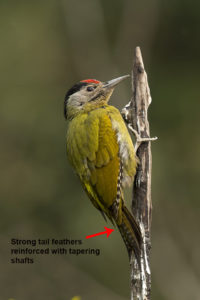 This helps to support  the bird remain in a upright position and peck through the tree .

Brain: Perhaps the most Astonishing anatomical adaptation in animal kingdom. The brain has to face huge force when the woodpecker Pecks or drums on the tree limbs. To absorb all these shocks the nervous system of the bird has evolved its own mechanism.  The brain is connected to spinal cord and there is very little Cerebro – Spinal  fluid present in this area of connection. 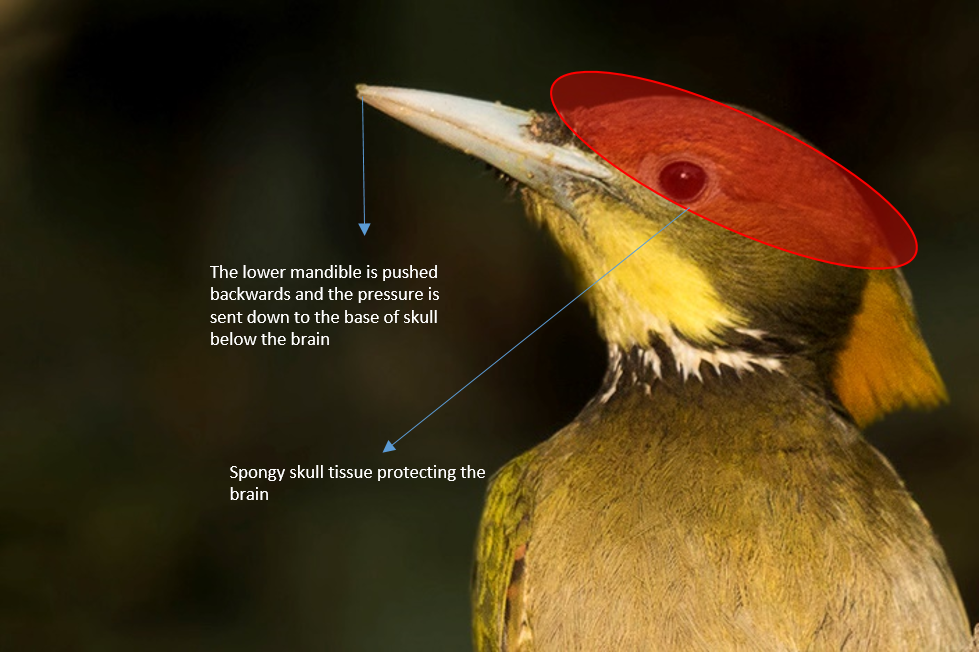 This is because the shock waves travel more easily in a liquid medium and to reduce this the amount of liquid is less.   The bones making up inner parts of the skull are plate like spongy texture and loaded with TRABECULAE. It’s a microscopic beam like bits of bone  that weave a mesh like structure around the brain to support it and prevent injuries. These bones are concentrated in front of the skull and in the back  to act as a shock absorber

Tongue :The bone that connects tongue and throat muscles is called Hyoids. This is horse shoe shaped structure in mammals. 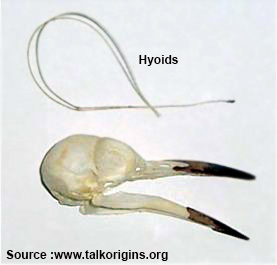 In woodpecker it has a unique shape and role as it wraps itself around the skull and in some species even covering the eye sockets and nasal cavity. This acts like a sling and prevents the brain from excessive movement when the woodpecker is pecking /drumming.

Beak : The Beak of the woodpecker has a Strengthening Mechanism at the base of the Hallux ( Upper Mandible). This prevents the beak from Cracking under the pressure. The Hinge mechanism between the frontal and nasal bone absorb the shock and stop it from reaching the brain. 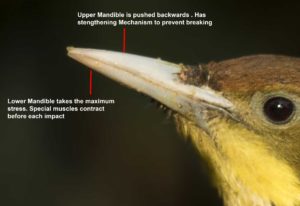 It is estimated that 99.7% of the stress of an impact is passed on to the body and only 0.3% is passed to the head and brain. Even this heats up the brain. Hence the woodpecker can be seen pecking at short burst and resting for a few minutes  for brain to cool down. 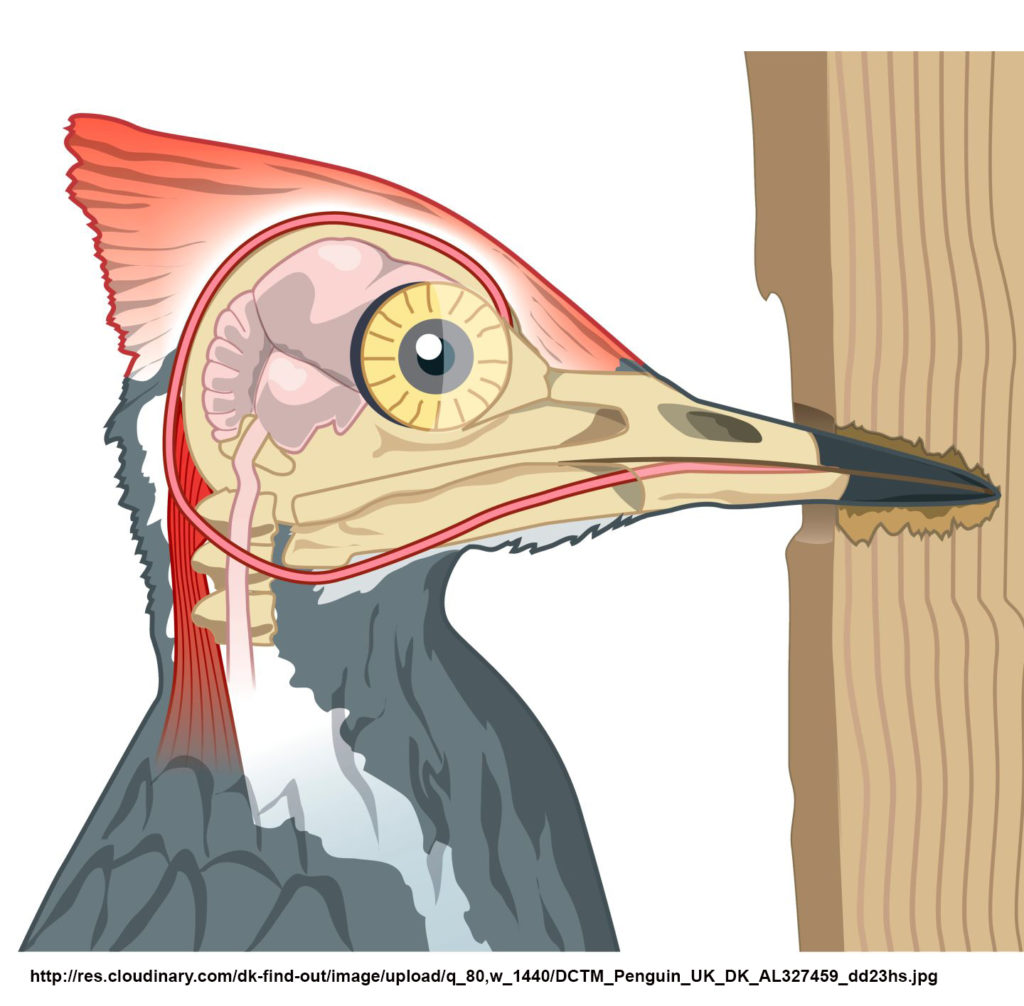 To put things in perspective, the woodpecker  bangs its beak to the tree surface at 12-15 MPH. This it does for average 12,000 times a day. In doing so they experience a “G” force of 1200. Maximum G force that human can survive is 10 G, that too only with special training like the fighter pilots.

So next time you see the woodpecker you know who is the Boss.